How to Calculate Staff Turnover and What Is Typical? 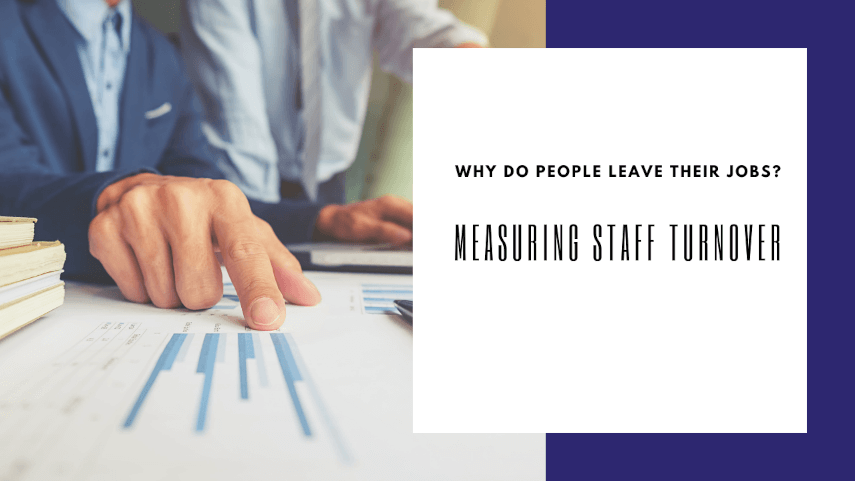 Staff turnover is a natural part of any organisation, but what exactly is it and how do you calculate it?

What facts and figures do you need to take into account, and what’s the best calculation method?

And once you know what your staff turnover rate is, how do you know if it’s too high (or too low)?

We cover this and more, so you can get clear on your staff turnover rate and why it’s important to have a good handle on it.

Why do people leave their jobs?

Hi, Andrew from SACS, and welcome to our sequence of videos on staff turnover, entitled Why Do People Leave Their Jobs?

And in this sequence, we’ll be taking an evidence-based perspective on staff turnover and we’ll be looking at issues like for instance, and how do you measure staff turnover?

But also we’ll look at some trends in staff turnover worldwide and give you some clues about how best to measure it and also ways of defining it.

Then we’ll be talking about reasons for staff turnover.

One of the things that drives staff turnover is people join organisations or jobs and they don’t really know what they’re letting themselves in for.

So if you haven’t informed people well enough about what the job means or what your organisation is about, that will drive staff turnover.

In addition, we’ll be talking about hiring practices because, of course, that drives staff turnover.

And then push factors and pull factors. Push factors are things that push people away from your organisation.

Pull factors are where people are being pulled away from your organisation to something more attractive.

And then we’ll be talking about some research findings.

SACS has undertaken significant research on this topic and we’ll show you what those findings are in video number five.

And finally, we’ll finish up by talking about techniques for reducing staff turnover and increasing retention.

What exactly is staff turnover?

So theoretically, if you’ve got 100 staff and 20 people leave, you’ve got 20% staff turnover. That’s the most common way and the most basic way of assessing it.

My answer to that is that if the temps and contractors are acting in an employee-like fashion and they’re crucial to what you do, well, you shouldn’t ignore them.

If, on the other hand, they’re project hires who come in, sell some skills to you and then disappear, well, probably it doesn’t make a great deal of sense to include them in your staff turnover figures.

So discretionary staff turnover is when people have chosen to leave.

And some people like to base their figures on discretionary turnover, largely because it states a much lower figure of staff turnover.

I think raw staff turnover is more helpful, and certainly that’s where the best benchmarks exist.

Then you have the question of how you measure it.

And so the typical way that people measure it is, you get to the end of a year.

Now, at first blush, that seems like a really sensible thing to do, but there is a negative there.

And the negative is that if your staff has been increasing, then you will understate the staff turnover.

If your staff has been decreasing, then you may well overstate the staff turnover because the figure at the end will be bigger or lower, depending on what’s going on in your staffing trends.

So the most powerful way or the most accurate way of doing this is what’s called the cohort method.

You might pick a particular cohort, let’s say 800, 900 of them, that were there at the beginning of the year and follow that cohort irrespective of what goes on and the proportion of that cohort.

That leaves, yes, you’re not sampling 100% of the entire population of your workforce, but if it’s 80 or 90%, it should be accurate enough to give you accurate staff turnover figures.

That’s the most accurate way.

This is from the Australian Bureau of Statistics and it’s companies in Australia (refer to the video).

And what you’ll notice is that the staff turnover rates change quite a bit from time to time.

And so you see, there was a big peak in the last big recession in Australia.

But I think what you’d have to say is that in general, the staff turnover rates in Australia have been declining for years.

This leads me to a trend in staff turnover and it relates to what people call the gig economy. One of my pet hates.

Over the past three or four decades, staff turnover has reduced markedly and so has the rate of self-employment.

Now I am self-employed, I run a company, and one of my concerns about where Australia and New Zealand is heading from an employment point of view is the decline of entrepreneurship.

We actually have way less self-management and self-ownership, business ownership, than we had going back three or four decades ago.

What you see now is that the average rate of staff turnover in Australia is just over 8%, and if you went back years ago, it would be 15%.

What is a good staff turnover rate?

Well, let’s look at some further statistics (refer to the video). What we see here is some split by occupation.

So professionals tend to turn over much more often than people who are in lower-level positions like machinery operators and drivers.

We see salespeople have a staff turnover rate of about 11%.

And I guess, depending on what types of employees you’re employing, that gives you a chance to benchmark your staff turnover against organisations generally and against the market.

But also if we look at these various characteristics, what you see is that most people in Australia have a staff turnover rate of between eight and 12%, most of the categories here.

And in fact, that’s what it looks like worldwide.

Many countries have staff turnover rates between eight and 12% overall. In Britain, I’m told that it’s about 15%, not sure why.

But in general, you tend to look for about eight or 12%.

The benefits of hotspot analysis

Now one of the things that can be valuable to try and understand this better in your own organisation is to do what’s called a hotspot analysis.

And the idea of a hotspot analysis is that you measure, through the cohort method, the levels of staff turnover in different parts of your organisation.

And by the way, that’s true for almost every organisation. So tenure can be a hotspot.

It could be gender. So maybe women turnover more than men or something like that.

Age – you may find, and you often do find and in fact, at a market level, it’s true that older people tend to change jobs less often than younger people, but it would be interesting to see what the case is in your organisation.

And of course, the benefit of all of this is that it can inform action.

So those are things that you might take into account when you’re understanding staff turnover in your own organisation.

If your staff turnover is too high, it’s a very valuable thing to do a hot spot analysis to see if you can “sheet that home” to a particular part of your organisation, or maybe to a certain tenure or to a certain age group or to a certain category of employment or something like that.

Is your staff turnover too high or too low?

Now this begs the really important question as to what your staff turnover should be.

And the answer is it depends on what you’re strategically trying to achieve.

And if that’s the case, if you’re going through very significant changes and you need to bring in new skills, well maybe you’re going to have a period of higher staff turnover during that time.

The alternative also can be the case. Maybe I’ve said that it’s around about 8.2, 8.3% in Australia for instance, there may be times when that’s too high.

In other words, you’re seeking to settle down the workforce and to retain the skills that you’ve got.

It comes down strategically to what you’re trying to achieve.

How to decrease staff turnover

But it is fair to say that if you have no strategic imperative for change and your staff turnover is too high, then you really need to consider what can be done to overcome that.

And so the rest of this sequence of videos deals with some of those things.

First thing we’re going to be talking about is have you make it clear to people what they’ll be doing? Because that’s a driver of staff turnover.

If the job turns out to be different from what people expect, they’re more likely to leave.

Secondly, have you hired well? Because bad hiring is of course a driver of staff turnover.

And then we’ll talk about push factors and pull factors, and then finally we’re going to show you some techniques for reducing staff turnover and increasing retention.