What Causes Change Resistance? And Why Do Some People Love Change? 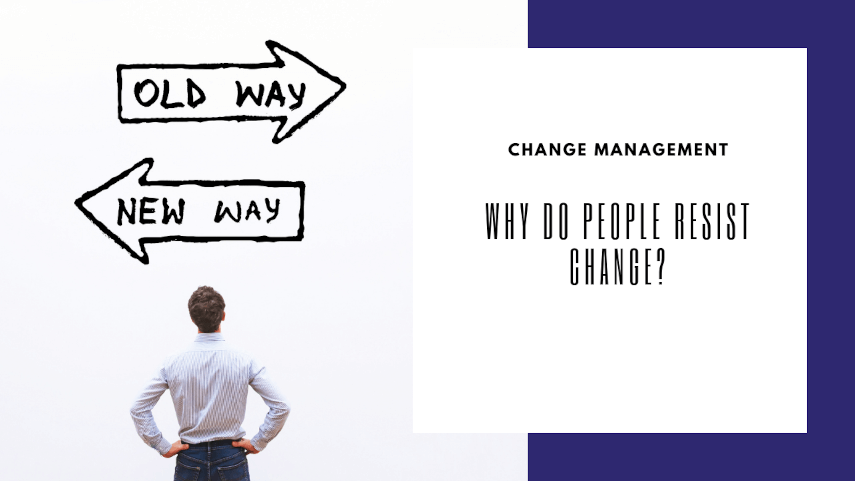 What contributes to our willingness to change?

Why do people vary so much in their receptiveness to change? Why are some people more than willing to make changes, while others strongly resist it?

Both nature and nurture contribute to people’s ability to handle change, and factors such as cognitive ability, personality and values play a huge role in people’s responses to change.

Let’s take a closer look at the specific factors that create change-readiness in people.

Part 4 – How to Avoid Change Fatigue: The Ideal Conditions for Change

Part 2 – The Psychology of Change: What Exactly Is Change?

And welcome to video number three in our six video series about change management.

This one’s all about receptiveness to change, why people vary enormously in the degree to which they welcome change or resist change.

We defined change from a psychological point of view, and we said that change is learning.

And today we’re going to be talking about why people vary in their acceptance of change.

And after this, we have these other three topics about change fatigue, the neuroscience of change, and finally, some suggestions about how to do change.

The basis of variation in people’s response to change

Everybody knows that people vary enormously in their receptiveness to change. Some people love it, some people hate it.

And why is this?

Well, like many things in life, there’s a mix of nature and nurture that causes this.

And both of those things will affect whether people are likely to be change-resistant or change-welcoming.

The role of cognitive ability

Cognitive ability, as I said, is a determinant of whether people learn quickly.

Now, if a person is high in these things, they are more likely to be change accepting and change learning than somebody who is low in cognitive ability.

And all of these questions are very similar to the questions that are in the HEXACO, but they are all worded for work.

And so basically, the characteristics that affect change readiness most significantly are things like the degree to which a person is emotionally stable or emotionally unstable.

There are people you know who seem to be quite resilient and quite ready to cope when things are tough or different.

And those people, the resilient people, tend to be more change-ready than people who are highly emotional.

Because when people are highly emotional, what happens is when they’re asked to change the way they do things, they tend to become stressed.

And when they become stressed, that gets in the way of their learning. And so it makes it more difficult for them to change.

Highly resilient people are both emotionally stable and conscientious.

So conscientiousness is a big driver of change-readiness, because people who are emotionally stable and conscientious, they tend to be able to cope with change because they tend not to be too upset by it, but as well as that they persist in the face of challenges. Resilience.

A third big driver of the preparedness to change is openness to experience.

If a person is high on openness to experience, it says that they are intrinsically likely to welcome new things, they’re interested in new things.

If they’re low, it says that they’re likely to be uncomfortable in the presence of new things, and they’re far more likely to prefer things that are familiar and comfortable to them.

So we look for people in change management environments, people who are at least average, if not a little bit above on this question of openness to experience.

Because if you imagine a combination of the things that we’ve discussed so far, somebody who’s, let’s say, highly emotional and also low in openness to experience, well, that means that they’re likely to become upset when things change.

The ideal combination of traits

The perfect combination is, of course, if somebody is high in conscientiousness, low in emotionality and high in openness to experience, well, they’re the sort of person who may love change.

And in fact, it may well be that, particularly if this person is smart, so they need to feed their brains, a combination like that may make them also very uncomfortable with doing the same stuff over and over and over.

The impact of personal values

This is the SACS Work Value scale (refer to the video), which has been validated against the Schwartz Portrait Values questionnaire.

Now, many of these values, and there are eleven of them, don’t really relate to change management at all.

But some of them do have a big relationship.

Variety. So this is the degree to which a person welcomes the opportunity to do a range of different things.

And you’ll see this candidate here (refer to the video) is in fact quite low in variety, so they’re quite comfortable doing the same things over and over.

The importance of tradition

You also see that traditional values. This is the degree to which a person is highly traditional in the way that they view things.

That’s relatively low for this candidate.

But if this was really high, this also may suggest a degree of resistance to change or perhaps not welcoming change because they like the traditional ways of doing things.

So if a person is extremely high in rule respecting what that may tend to make them do is to be obedient to the way that things have historically been done in an organisation.

The idea of positive deviance is where somebody does something different from what we all expect but actually improves things and you can’t really have spontaneous change without positive deviance.

Now on the way in, it’s possible to measure the change resistance of individuals and this is an instrument that we offer at SACS (refer to the video) where you can measure the degree to which a person is change-resistant.

So that’s why people vary in their acceptance of change.

There are good nature and nurture reasons why this happens and so these characteristics you can recruit for a more change-ready workforce by virtue of concentrating on the characteristics that we’ve mentioned in this video.

In the remainder of these videos we’re going to be talking to you about some really important issues associated with making change happen.

The next one is about preconditions of change and a thing called change fatigue.

You’ve heard, I’m sure, where people say that people in this organisation are change fatigued.

Interesting that, isn’t it? I wonder what that means.

Watch the next video to find out.

Watch the next video in this series to find out more about effective change management practices:

Part 4 – How to Avoid Change Fatigue: The Ideal Conditions for Change

Part 2 – The Psychology of Change: What Exactly Is Change?

And if you’d like some help to measure the change resistance of your incoming recruits or the current engagement levels of your staff, contact us about our Employee Engagement Surveys.