Dangerous employees – what are the signs? (part 2) 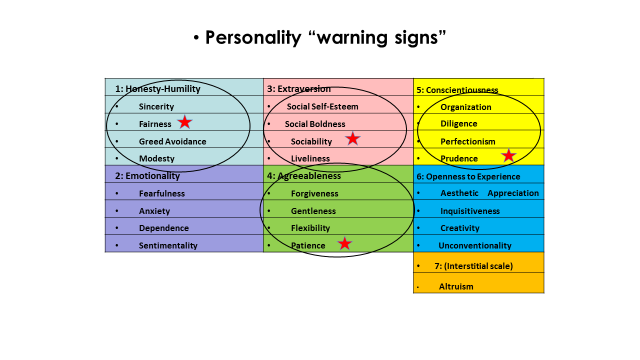 This continues from last week’s blog posting.  The story so far – indicators for violence among employees include: low levels of cognitive ability (IQ), low levels of self-control, high levels of trait anger.

Another marker is low levels of a personality characteristic called “honesty-humility”, which was discovered by Kibeom Lee and Mike Ashton from Canada around 2004.  This is a personality measure which indicates how truthful and trustworthy a person is, as well as whether they are arrogant or not.  It seems that arrogant people have difficulty in being honest and truthful.  This was a significant discovery for the world of psychology, because people who are low on honesty-humility have a number of marked risk factors – for instance they go to jail more often than people with high honesty-humility.  Low HH is also an indicator for the likelihood to sexually harass (Lee et al, 2003).

The first box we will talk about is the Honesty-Humility box.  As mentioned in the text above, look for people with high HH scores.  They represent a much lower risk of a range of negative behaviours.  You will notice that I have put an asterisk against fairness.  Fairness is an unwillingness to cheat to get ahead.  In our research we have repeatedly found this personality marker to be a risk factor for interpersonally dangerous behaviour – impoliteness, snubbing, inability to get on with others.

You will see that we have also put a circle on Conscientiousness, with an asterisk on prudence.  Low conscientiousness is an indicator of a scrambled, disorganised, lazy approach to life and work, and these characteristics have been shown to be a risk factor in a range of negative behaviours.  You will see an asterisk against prudence, because people high in prudence tend to have higher levels of self control.

There is also a circle around extraversion, including an asterisk against sociability.  We discovered low sociability to be a marker for interpersonal negative behaviours, but Lee and Ashton (2014) discovered that a combination of low honesty-humility, low conscientiousness and low extraversion was a marker of psychopathy.  If you are low in one of these things this does not indicate psychopathy, but all three in combination is a concern.

Finally, you will note we have put a circle around agreeableness.  In the Hexaco model low agreeableness means anger, and you will see above that trait anger is a risk factor for violence.  We put an asterisk on patience, because low patience means quick to anger – a short fuse.