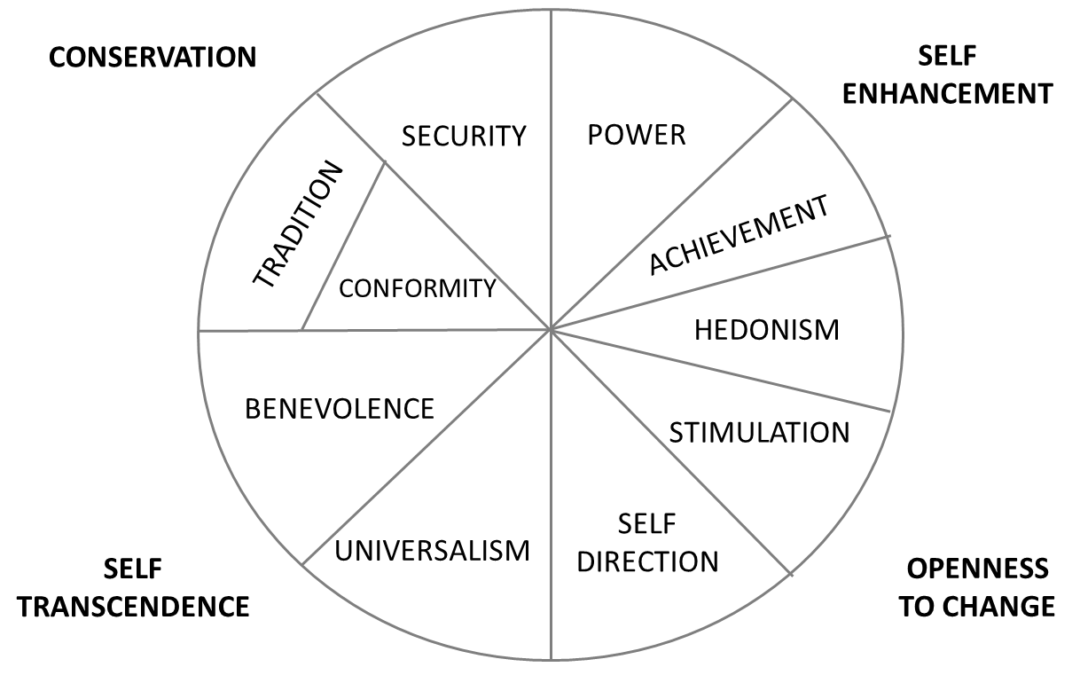 Many people put a significant emphasis on organisational values to create the culture that they want in their organisation.  I will be writing a blog post later on the topic of mission and values in a  more general sense. In this post, the last for the moment about dangerous employees and the science of identifying them, we will look at values and how they can affect the amount of dangerous behaviour in a work place.

Firstly, what do we mean by “values”.  Many organisations in Australia have values statements, but what is a value?  I saw an organisation recently that had the value of “internationalism”.  Is that a value?  I sat down on a rainy Sunday and searched out the values statements of Australia’s top 200 companies and found that 62% of them stood for “integrity”.  But is that a value?

Professor Schwartz and his colleagues had literally millions of people around the world complete questionnaires related to their values and then analysed the results.  He found that people had cultural values – there were seven of these and they differentiated the value sets of one country from another.  In other words, different cultures had different goals – some were egalitarian, for instance and others were comfortable with power distance between people in society.

He also found that individuals had personal values – ten of them, which related to what the person felt was important.  These values seem to be learned in the process of growing up and then applied in life decisions.  Below is a diagram of the ten personal values Schwartz found with explanations as to what they mean.

¨       Power is a measure of an individual’s need for social status and prestige, control or dominance over people and resources.

¨       Achievement is a measure of an individual’s level of commitment to career progression and career success through demonstrating competence according to social standards.

¨       Hedonism is a measure of an individual’s desire to seek pleasure and sensuous gratification for oneself.

¨       Stimulation is a measure of an individual’s need for excitement, novelty and challenge in life.

¨       Self-direction is a measure of an individual’s independence of both thought and action – choosing, creating, exploring.

¨       Universalism is a measure of an individual’s understanding, appreciation, tolerance and protection for the welfare of all people and level of commitment to social justice and environmental sustainability.

¨       Benevolence is a measure of an individual’s desire to preserve and enhance the welfare of people with whom they are in frequent personal contact.

¨       Tradition is a measure of an individual’s perceived level of respect, commitment and acceptance of the customers and ideas that traditional culture or religion provide for the self.

¨       Conformity is a measure of an individual’s respect for the rules of groups they belong to by demonstrating restraint of actions, inclinations and impulses likely to upset or harm others and violate social expectations or norms.

¨       Security is a measure of an individual’s perceived level of safety, harmony and stability of society, of relationships and of self.

In 2013 we undertook a major study of counterproductive work behaviours.  We surveyed in excess of 1000 working Australians and we asked them to confess to doing bad things – stealing things, bullying colleagues, taking sick days when they were not really sick, etc.  Because the survey was confidential people confessed to alarmingly high rates of these behaviours – way higher than people typically find in organisations because bad behaviours are massively underreported in the work place. We also measured the values and personality profiles of all these people to see if we could find out how accurately values and personality predicted these bad behaviours.  It turned out that we could predict the bad behaviours with 42% accuracy from their personality and with just under 18% accuracy from their values.

So, values are nowhere near as good a predictor of bad behaviours as personality is, so do values have a role to play at all?

Knafo and Khoury-Kassabri (2008) found that values could act as a moderating factor for violence.  For example, if a person was high in the value of “Conformity”, suggesting a respect for rules and a belief that being a rule abiding person is a good thing this served to reduce the likelihood that the person would commit violence.  Similarly, if the person was low in the value of “Power” it made them less likely to seek to dominate others and therefore less likely to engage in extreme behaviours.  In short, values can be a protective factor against a personal inclination to negative or dangerous behaviours.  I think the key point is to hire people with positive and benign personalities and it is also a good idea to test for the values necessary to help them manage anger or other extreme emotions.