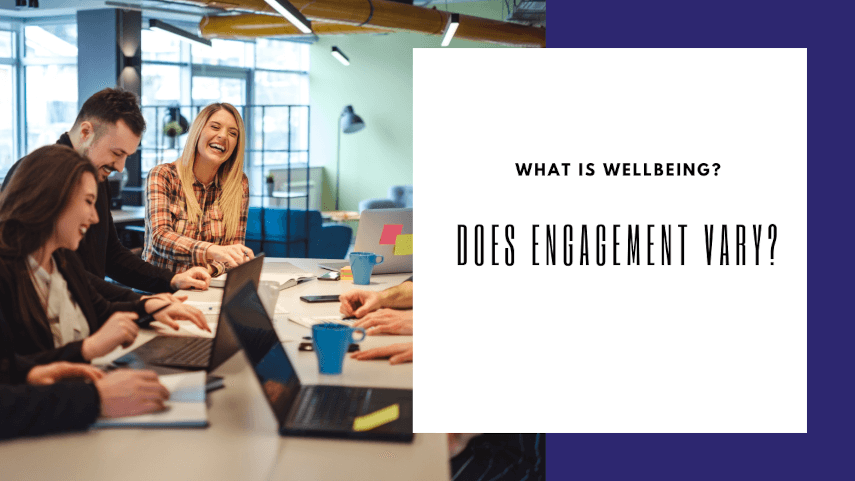 Do Engagement Levels Vary? What the Data Says

We surveyed two and half thousand people on their levels of engagement – and thus wellbeing – at work, and broke the results down by industry, age and income.

What we found is that most people are reasonably well-engaged at work, but there are some major differences based on industry sector, employee age and salary.

Let’s take a closer look at which industries are the least and most engaged, the differences between younger employees and their more experienced counterparts, and the massive opportunity presented by middle management.

How does engagement vary across groups?

Hi, Andrew from SACS, and welcome to video number six in our series on wellbeing at work.

You’ll see that a number of the topics that we’ve covered so far, we’ve talked about physical health and well being.

We’ve talked about happiness. In video number two, engagement has been a theme in the last couple of videos.

And today what we’ll be doing is showing you some really interesting data about how engagement varies across industry sectors, age and income.

What the engagement research data shows

Let’s show you some of the data that we have developed from a range of research parties that SACS has been involved in over the years.

And we use the Utrecht Work Engagement Scale because it’s something that’s often used in research to measure engagement – engagement as defined by vigour, dedication, and absorption, as I mentioned in previous videos.

And we can get an overall summary score for levels of engagement from people who are in an extremely wide range of jobs.

So the data that we’re showing you is data based on very big samples here in Australia, about 2600 people is the number of people that were surveyed in these studies (refer to the video).

Which industries are the most and least engaged?

This is based on a five-point scale. And so you see that the real functional range of this scale is sort of between three and five, which actually suggests that most people are reasonably well engaged in their work.

Other researchers suggest that people are relatively disengaged in their work. We hear people saying that maybe 70 or 80% of the workforce is disengaged. I can’t support that view.

In fact, if you look at these five-point scales, a measure of about three is sort of somewhere in the middle, and most people are comfortably above the three, as you can see from this data, which suggests that people are more engaged than disengaged in what they do (refer to the video).

If we look at the particular industry sectors, you see that these are statistically significant differences.

But what you see is the most engaged workforce in Australia and New Zealand is health services. Now, that includes sectors like aged care and disability, but the caring sectors.

And then primary industries are highly engaged, which is interesting. So that’s farming, pastoral services, those sorts of things.

When we look at the opposite end of the scale, the lowly engaged sectors are things like fast-moving consumables.

So when you get to the counter of a convenience store and you’re about to pay, fast-moving consumables are the things that are around you there.

And for some reason and in fact, other studies that we’ve undertaken have suggested this, for some reason, the companies that are involved in this seem to be populated by people who are relatively disengaged and unhappy, which is not a very glamorous way to be if you’re working in that sector.

And you wonder why, I guess? I mean, it’s a logical question. They’re both in government.

I think the reason is that local government tends to be more immersed in a local community and tends to get a lot of local feedback and they get a chance to see the results of their efforts.

So their community or their municipality, they get to see the improvements that they’re making.

Whereas maybe if you’re working in state government, the improvements that you make are a bit more theoretical and you certainly don’t get the direct customer contact that people do in local government.

Let’s look at the results by age (refer to the video).

Are older people less or more engaged in their work? And in fact, what we see here is some really significant differences in quite a large spread.

What you find is that people who are 30 years or younger tend to be quite disengaged in their work or comparatively so.

And interestingly, the levels of engagement of employees increase quite markedly as they age.

I guess one reason could be that younger people have got other things that are more interesting than work to focus on.

That’s one possibility, and that suggestion has been made to me on a number of occasions when this slide’s been shown.

An alternative viewpoint is, maybe what’s happening is that people actually find their careers.

Maybe what’s happening is that they start off hunting for the right things to do, things that would satisfy them, and eventually they find them. Anyway, that’s a nice optimistic way of looking at it.

But certainly there is no question that as people age, they become more engaged in their work and that’s an important characteristic to look forward to.

The curious effect of salary on engagement

Then we talk about engagement and salary.

And I think that this is some of the most interesting results that we see in engagement, because what we see in this diagram (refer to the video) is that people who are comparatively modestly paid in Australia and New Zealand tend to be relatively well engaged, and then people who are highly paid tend to be relatively well engaged.

But if you look at the salary band from, let’s say, 70,000 to 150,000, they are the least engaged people in the entire workforce. I think that this is both good news and bad news.

The bad news bit is that you have this very large cohort of middle management that seemed to be quite disengaged.

Why is this? Well, there’s a range of theories.

One of the theories is that if you’re in middle management, you are, in effect passing on the decisions of the higher-ups to the people who are lower down and maybe you’re not particularly loved by either.

Maybe that’s one of the things that happens when you’re somewhat stuck in the middle.

You get this sandwich effect where you’re not particularly empowered.

And by the way, we measured levels of empowerment of all of these different salary bands and we did find that the people in the middle, the people in that middle management level, felt themselves to be less empowered than people who are lower down.

And I suspect what’s going on with them Is that they have the direct customer contact or the direct impact on the work which does empower them. They’ve got some freedom about how they go about it.

And of course, if you’re up the scale and you’re a chief executive or something, well, you’re naturally empowered by your seniority. So that’s the bad news.

People in middle management in Australia and New Zealand look like they’re highly disengaged in comparison to the rest of the workforce.

An opportunity for middle management

But there is some good news, because I think this is an amazing opportunity. I mean, this is a very large slice of the workforce and if you think of it in salary terms, there’s billions of dollars that’s being invested in these people.

So there’s an opportunity to increase levels of staff retention, reduce levels of staff turnover and also to improve productivity of these middle managers by causing them to be more engaged.

So that’s an opportunity.

Using this data on wellbeing & engagement

So there’s some data about engagement and wellbeing and how it varies in different sectors of the workforce. And given that engagement is such a good proxy for wellbeing at work, I think that’s worth looking at.

Join us for the next video where we’ll be talking about resilience and you’ll see that we’ve used the term enduring wellbeing here.

Why enduring wellbeing? Well, people who are naturally resilient tend to be able to maintain their own levels of wellbeing.

Resilient people have a kind of an internal mechanism to be able to ensure that their wellbeing doesn’t decline markedly.

Click on the link below to join us for the next video.