The Myth of the Gig Economy: What’s Really Happening to Jobs and Work 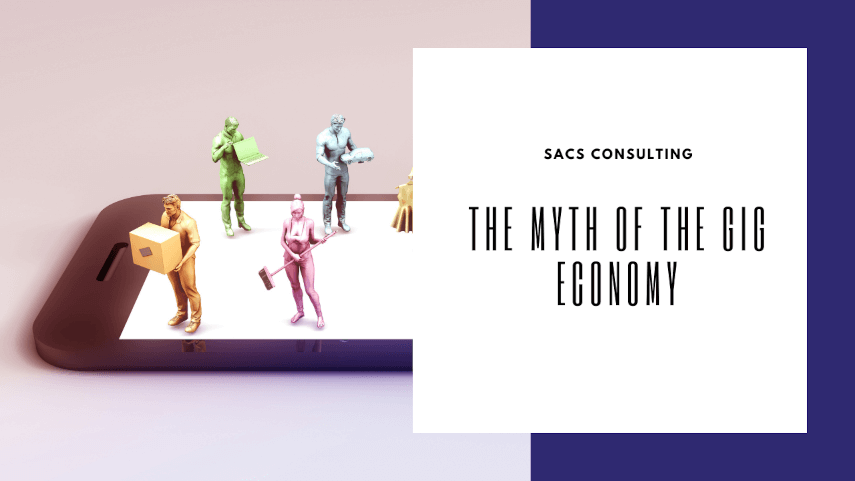 If you read social media, you’d think that in a few years there won’t be any jobs left and we’ll all be working in the gig economy.

But the trends show that reality is actually very different.

According to the statistics, from Australia, the United States and the UK, the trends are for fewer casual employees, higher job security and lower self-employment.

Get the facts on the future of work and the gig industry.

The Myth of the Gig Economy

You know, if you read social media, you would believe that we’re all going to end up working in the gig economy.

We won’t have jobs anymore. We will be self-employed.

We’ll be subcontracting to giant corporations and we would be paid however many hours we work.

That’s the future of employment in the world. Right?

Well, there’s only one problem with that, and it’s completely untrue.

It’s untrue in Australia, and I’ll show you exactly why, but it’s also untrue in most places around the world.

Here’s some statistics (refer to the video), and I do owe this originally to Robert Sobyra, who was at the University of Queensland completing a PhD when he pulled this data together.

And then at 2016, where Sobyra’s figures finish, it was as low as it had been since 1996. So he’s saying that the trend is a negative trend.

Now 2016 is a long time ago. So what’s happened to the figures in recent times?

Well, according to the Australian Bureau of Statistics, the proportion of casual employees in the Australian workforce just before COVID-19 was about 20%.

And so we’re talking about around about here (refer to the video). So it continued to decline.

Now, sadly, during COVID-19, the proportion declined even further. And that is because, of course, casuals were the greatest casualties of COVID-19 because they were easily laid off.

Interestingly, they’ve started to come back a little, but they’re certainly not back to the 20% that they were before COVID-19.

Because if we’re all working as subcontractors to giant corporations, well, there should be a fair slice of us that are self-employed.

Well, have a look at this (refer to the video), because what it shows is the percentage of employees in Australia who are self-employed.

And you’ll see that that, too, peaked at around about 2002, and it has collapsed in recent times to the point where we have some of the lowest figures for self-employment ever in the history of Australia.

What’s happening is that we’re increasingly working for corporations and we’re not going to be entrepreneurs and running our own business.

And personally, as a person who owns his own business, I’m a little worried about the future of entrepreneurship in Australia because this is a collapse of historic proportions.

Well, the answer is, job security has increased markedly as staff turnover has declined.

This graph here (refer to the video) shows you three samples, persons, males and females. And not surprisingly, male and female staff turnover correspond quite closely.

And what you see is that the peak of staff turnover was around about 1990, and that was an economic recession.

So it’s probably not surprising that that caused a decline in job security.

But then what we see is a steady decline to the point where staff turnover as a percentage of the workforce is as about as low as it’s ever been in Australia.

By the way, the staff turnover in Australia appears to be between eight and 8.5 percentage points, which is actually very low by international standards.

Although at the time I’m recording this, they’re going through a thing called the Great Resignation, which has pumped up staff turnover rates enormously.

So they’re getting 6% per month now of staff turnover, where historically it’s been 2% or something like that.

But it is interesting to know that Australian employment is far more stable than, for instance, the United States or the UK. UK is much higher than Australia as well.

Why people believe the myth

So why do people believe this?

And Daniel Kahneman worded it by saying “What you see is all there is.”

In other words, if you see a particular thing, so you’re driving around and you see Deliveroo drivers or if you see people delivering courier bicycle food, that kind of stuff, you kind of think, okay, well, that’s what must be happening, particularly if the media tells you that’s what’s happening.

The truth about the gig economy

So the truth is the exact opposite of what you’re being told on this score.

People’s employment is becoming more reliable, their jobs are safer, and they are less self-employed than at virtually any other time in the history of the Australian economy.

If you read the press about developments in the Australian employment markets you will be well aware that permanent employment is in decline.

In fact sooner or later we will be all employed in “gig” roles such as driving Ubers or selling our skills on a casual basis, even if we are professionals. This is all very compelling, but it is also completely untrue.

An excellent review of the actual figures was undertaken by Robert Sobyra, a PhD student at the University of Queensland. He showed that:

Sobyra makes a very valid point. It appears that many of the players in workforce policy development, including politicians, believe this casualisation nonsense.

To see the SACS approach to workforce planning click here.

If you’d like to explore how SACS’ products and services can optimise your recruitment processes and employee development, please contact us.