Human Beings are getting smarter 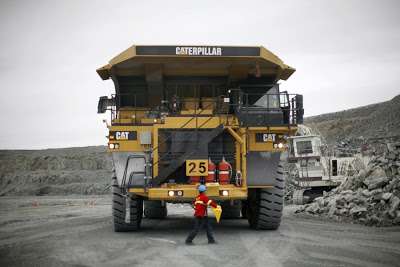 I read the following article about miners in the Pilbara running entire mine sites with robot trucks. (to read the article please click here) Not remotely controlled trucks, autonomous robotic trucks. They have sensors to detect their location and to sense obstacles.  They make their own way around mine sites, moving ore. Rio Tinto has 30 of these robotic giants in operation, and plan to go to 150.

Why have mining companies gone to the expense and trouble of replacing human drivers with these robots?  The answer seems to be twofold:

This kind of development is regarded with suspicion by many followers of the labour market.  They fear that this kind of change will lead to widespread unemployment as technology takes over from human beings.  There seems to be little evidence of this so far, because unemployment rates are in a nett sense no higher than they were decades ago, in fact they are markedly lower in some countries.

It seems that when menial jobs are killed off by technology this is balanced by the creation of new jobs.

If I think of our employees at SACS, more than half of them are involved in providing technological, typically web based services, which did not exist even a decade ago. In the case of Western Australia, 60% of the world’s mining software development takes place there, which is an excellent example of trading old jobs for new.

All this seems to be changing the brains of human beings.  In the late 80’s James Flynn (1987) observed that IQ scores were rising across the world – the phenomenon has come to be called the “Flynn Effect” in his honour.  Further research indicated that not only were IQ scores rising, but people’s memories for words and events were also improving.  People’s capacity for attention is also rising – we are better able to focus than our predecessors.  These differences are not minor. In fact measures of IQ in the USA show that in 1932 about a quarter of the population would have been rated “deficient” by current standards.

Why is this happening?  I think the robot trucks example above gives a strong hint.  It takes a much higher IQ to write software than to drive a truck, so there is a strong success driver to develop higher IQ.  We know IQ has a strong genetic component – some say as high as 80%.  We certainly know that in most cases individual’s IQ’s don’t change for the better in their lifetimes, so this must be some kind of population effect.

The jury is very much still out on the real means by which this is happening, but what it shows is that from generation to generation the brain is phenomenally quick to evolve.  For years it was assumed that it would take thousands of years to change the brain, but the Flynn Effect shows that the most complex device on earth is also one of the most adaptive.  No wonder we took over the planet.