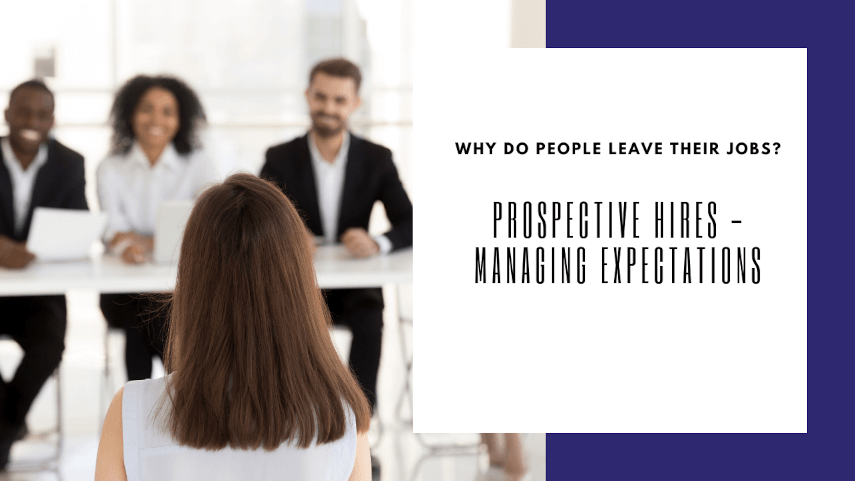 Why it’s essential to set clear expectations with prospective hires

One of the key reasons that people decide to leave their jobs is that they get into the role and discover that it’s different from what they expected.

If people feel there’s a mismatch between the job, team or leader, and their expectations, that can lead them to quit their job and move on

There’s also an important part of any job that most organisations get wrong, and that’s the job description, and we discuss the importance of job outcomes and work sampling to help with staff retention rates.

Part 1 – How to Calculate Staff Turnover and Benchmarks

Do your new hires know what they’re letting themselves in for?

Welcome to video number two in our six video series on staff turnover called Why Do People Leave Their Jobs?

In the first video in this sequence, we talked about how to measure staff turnover, and we also addressed the philosophical question of what is an acceptable rate of staff turnover.

In this video, we’ll be talking about the question of do your prospective hires know what they’re letting themselves in for when you hire them?

But in this one, we’ll be talking about the question of how we cause people to understand what they’re letting themselves in for when they join your organisation.

And there’s really two key reasons for that.

Key reason number one is you’ve hired the wrong person. And we’ll be dealing with that in subsequent videos, not in this video.

But key reason number two is that people get into the organisation and they discover that it’s different from what they expected.

The three things that people care about above all else

So what do people care about? Well, in fact, research suggests that people really care about three things above all else.

Wellbeing comes 80% for employees from the job that they do, the team that they belong to and the leader that they report to.

The leader is in fact, the absolutely crucial linchpin in all of this, because the leader behaviours tends to influence the behaviours of the people around that staff member.

So when a leader behaves positively, you tend to get a positive corporate culture.

Corporate culture, by the way, is just the balance of positive or negative experiences that a person experiences at work.

If they’re getting less than that, let’s say half and half or something of that nature, then you’ve got a negative corporate culture.

How do we acculturate new hires?

How do we acculturate people to the job and the team and the leader?

Now, one thing that organisations tend to do quite well is the organisational explanation.

You have glossy videos on your organisation and you have documents that explain what your philosophy is and all of those sorts of things.

But if that’s only 20% of the equation, what we have to do is orientate people towards the local.

That’s what we’re talking about. Job, team and leader. So let’s talk about how you might do that.

Why most job descriptions are terrible

Now, the first thing I want to talk about is the job. Because most job descriptions in the world don’t work.

What creates clarity for people is the outcomes that they need to achieve.

So to differentiate between tasks and outcomes, let’s say I’m a human resources manager.

You know, the number one thing that a human resources manager must do is to keep internal customers happy. That’s an outcome.

And there are simple ways of measuring that.

Maybe you sample their levels of satisfaction once every six months or a year or something like that.

The key thing that a human resources manager must do is to keep internal customers happy. By the way, that goes for most corporate roles – chief finance officers, auditors, whatever.

But, this is something that’s virtually never mentioned in a task-based job definition. So isn’t it bizarre?

Something that’s so important doesn’t get mentioned in most job descriptions.

Here’s a diagram, an infographic, that explains some of this (refer to the video).

We created this term “real world outcomes”, which means the outcomes that an organisation needs to achieve.

And why real-world outcomes? Well, it’s about making the world a better place.

Every organisation should be able to define their strategic purpose by, let’s say, five to seven outcomes that they need to achieve and also how those outcomes will be measured.

Now, you might have additional KPIs, and in the United States of America, they often use the expression 20 is plenty.

So imagine you had seven outcomes and in total you might have 20 measures to assess whether those outcomes are being achieved.

American boards will insist on such a simple definition of success. It makes it far easier to know whether the organisation’s on track if you define success in this way.

Imagine somebody is thinking of working for your organisation and you’re just about to hire them.

That’s going to make it clearer for people.

Here’s what an outcome-based job definition would look like – a definition of the outcomes and how they’re measured, but then the skills that are necessary to deliver the outcomes, the experience or qualifications necessary, and the attributes which are style, behaviours and approach.

So they’re the competencies that are necessary to achieve the outcomes.

This form of job definition makes it far clearer to people what their job will actually involve. But it’s not enough.

How to use work sampling to recruit the right people

And so let’s talk about what else we can do.

We’re going to talk about that a little bit further down the track, because the question of whether you’re recruiting people who are right for your organisation is a really important one.

And there are a number of means that you can use to assess whether people are likely to work out for you.

But one of the most powerful is a thing called work sampling.

Work sampling is where you get somebody to do the actual work before they get hired, that they will do after they’re hired.

So let’s say it’s an accounting job. You get them to work on a set of accounts which should be exactly the same set of accounts that they would work on if they’ve been employed by you.

And you get them to analyse, interpret, maybe write a brief report.

Work sampling is an incredibly accurate measure of potential work success, but it’s also a great way to get people to understand what they’re letting themselves in for.

We see, for instance, in disability services, quite often organisations that are progressive are in fact, paying people to come on and do a couple of shifts before they get hired, and that gives them a chance to understand the way that the organisation does things.

So internships is another example of work sampling, where you get people in, they do the work for a long time, maybe some months, in some cases, I mean, law firms often use these internships or summer clerkships or whatever you want to call it.

Those things will markedly reduce selection errors in both sides.

Get prospective hires to reference check YOU

Another thing that would be really relevant to do is to encourage the employee, the prospective employee, to reference check the organisation.

Why not get them to reference check us, give them the contact details of employees who are doing similar work, maybe in the same team or whatever, and get them to tell them what it’s really like?

You know, it’s far better to be honest and even blunt with people so that they make a good decision rather than hire them and then subsequently have them leave because it turned out to be something different from what they wanted.

The third thing that you might do in that process is just to prompt them, encourage them, say, look, we really want you to make the right decision here and we’re interested in you, but we need to know that you are interested in us and interested in the kind of work that we are going to do.

So please feel free to ask as many questions as you want of a prospective, of an existing employee so you get a clearer idea as to what the organisation and the role is about.

Be clear, open and honest

So it’s better to be open about both the good things and the bad things than to have a high staff turnover.

So one of the parts of the equation of reducing your staff turnover is just to be clear with people about what the job is, what the team is and ideally, what the leader is before they come on board and the internal reference checking and the job sampling kind of approach certainly can help with that.

In the next video we’ll be addressing the question of whether you have made a good hire or not.

Staff turnover, as I mentioned earlier, tends to be highest in short tenures, so let’s hire the right people.

Part 1 – How to Calculate Staff Turnover and Benchmarks