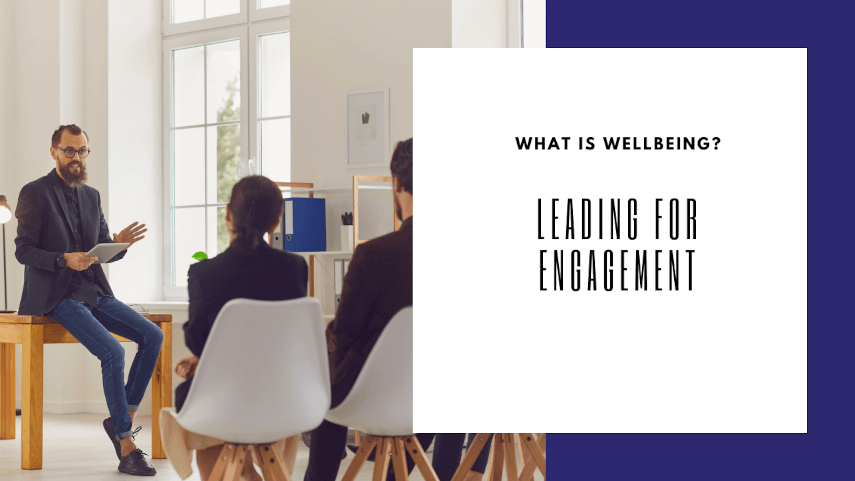 How leaders influence engagement at work

Absolutely, and there are 10 key leadership behaviours that affect staff wellbeing, across all industry sectors.

There are also three different models that bosses can use, which greatly affect levels of engagement, plus four characteristics that leaders need to display to keep employee engagement high.

Let’s take a closer look at these.

And welcome to video number five in our series about, wellbeing at work.

Let’s talk about what we’ve covered so far in this series.

We talked about happiness and we’re talking about engagement in the last couple of videos and continuing with this one – wellbeing at work being defined as engagement partially, recruiting for engagement, and this one’s about leading for engagement.

So to talk about how to lead for engagement, let’s look at some leader behaviours.

This is the result of a big study that SACS undertook some years ago in partnership with Deakin Uni, where we looked at a range of leadership behaviours which determined whether staff would be highly engaged in their work (refer to the video).

And what we discovered was that there were a number of leader behaviours that seemed to be very important.

Here are ten of them.

We also discovered that effective management of behaviours and creating clarity about appropriate behaviours was important.

Effective management of underperformance and of course, creating clarity about performance standards, celebrating success and being optimistic and positive, were ten leader behaviours that were strongly supported by research as being leader behaviours which drive high levels of engagement in staff.

Now, we discovered that these effects took place almost irrespective of industry sector.

And that’s what the research around the world suggests. It’s not as though you need to tailor your engagement efforts to particular industry sectors.

There are certain things which appear to be virtually universal.

And so this diagram on the bottom right hand corner here (refer to the video) shows the levels of behaviour or the types of behaviour that were most important in driving levels of engagement.

And the first is encourages autonomous decision making.

Okay, let’s de-jargonize that – what we’re saying is where leaders empower staff.

So the single most powerful thing that you can do to increase levels of engagement in your workforce is encourage them to make decisions about how they will do their work.

The more empowering you can be, the more engaged they are likely to be.

This is the universal driver of engagement.

People tend not to have high levels of engagement when they’re being led in a very top-down fashion.

And if you are a top-down organisation, I think you can probably top out your levels of engagement at maybe the 60th percentile, which is better than 60% of the population, if you are extremely well run.

But don’t expect to get up to the 80s and 90s and those really optimum levels of engagement, if you’re top-down. You need empowerment to do that.

The second most powerful driver is the leadership behaviour of being optimistic and positive.

And that’s pretty simple. Leadership evolved so that people could get a better future.

So in the human world, people tend not to want to follow people who are negative, cynical, pessimistic. We like leaders who are optimistic and positive.

So that’s an important driver of levels of engagement.

And the fourth one is about creating a learning environment.

And so good leaders create a situation where their staff can learn, can grow and can build their confidence.

Human beings evolved to learn. That’s one of the reasons why we have taken over planet Earth.

We are the one creature that can live at the poles or the equator, or in hot climates or near water or whatever. No other animal is anywhere near as flexible as human beings are.

We love to learn. And learning at work is something that drives people’s passion for work very strongly.

At one end, you have the situation where the leader is the boss.

The boss tells the staff member what to do.

Now, bear in mind that if this is your dominant model of leadership, you have to understand that you have robbed yourself of item number one in the shopping list of creating high levels of engagement because you’re not encouraging autonomous decision making.

But it is true to say that good leaders do need to be top-down.

This is where you’re asking people their opinion on certain things, and then you go back to your office and you make up your mind and you then communicate your findings to the people that you’ve consulted.

Now, the risk of this, of course, is that if you don’t do what somebody suggested that you do, they may feel cheated, they may feel that you just pretended to consult them.

But in any event, even if they don’t feel like that, they certainly are likely to feel that you’ve done model one leadership, and that is that you’ve purely and simply been the boss.

Model three leadership is about facilitation. Now, this is sometimes called facilitative democracy and leadership.

So this is where a leader, instead of making his or her own mind up or going into a meeting, having decided what needs to be done.

And it’s often called facilitative democracy because it works best when everybody comes up with ideas and then you vote for the ideas that the group supports more.

Now, if you do this, this style of facilitated leadership leads to higher levels of engagement.

So empowerment, trust, optimism, they’re all shown, aren’t they?

When you take an issue to a work group, and the issue might be a problem or it also might be an opportunity, how are we going to make the most of this situation?

You cause the work group to come up with great ideas, you then sponsor them to actually do those ideas.

And your role as a leader is much more of a supportive role, rather than I will tell you what to do.

It’s also great if you then empower them to actually execute the solution, whatever it is that they’ve come up with, you empower them to do it, not just to tell you what to do, so you can then use your authority, but where you sponsor them to use their authority.

This is a very positive style of leadership – increases levels of engagement very markedly.

The future of leadership

If you look at most leaders across the world, they oscillate between model one and model two.

But the second skill set is how do I do this? How do I be a good facilitator? How do I run a process where, rather than making up my mind and telling people what’s being decided, where I caused them to be skilled at making up their minds, leading like a facilitator.

And I think that organisations should build this into their leadership development activities.

Because if people are skilled in choosing when to use these three models of leadership, and especially if they use model three enough, what you will end up with is a workforce that will increase its levels of confidence.

And when leaders do this, they often tell me that instead of people coming to them with problems, they come to them with ideas and potential solutions.

So the interaction with a leader is, instead of saying, tell me what to do, it’s more along the lines of hey, we thought of this.

What do you think? So you’re adding value by giving them feedback and guidance on the suggestions that they’ve come up with.

Proximal vs distal factors for wellbeing

Now this is also a very, very important diagram (refer to the video) from researchers by the name of Cotton and Hart here in Australia going back some years ago, but employees live in four worlds they live in the world of their job, their team, their leader and the organisation.

And what I mean by distal Is that it’s not close to me, it’s away from me.

It’s a concept in most cases.

So the important thing to understand here Is that 80% of people’s wellbeing comes from the immediate team that they belong to.

Now if you’re a leader who is a positive leader then I think you can take this as a great source of optimism because you can have a massive impact on the wellbeing of your staff.

On the other hand, if you aren’t confident to empower people, to support them, to cause them to learn, and also to demonstrate a sense of optimism about what the future is likely to be like, you have to understand that you may well be damaging the wellbeing of those staff and causing them to have lower levels of engagement at work.

How to lead for engagement & wellbeing

The next video is going to be about how engagement varies across different segments of the workforce.

So for instance, do different industry sectors have different levels of engagement?

Are there differences in engagement across different age groups?

Click on the link below to see the next video and join us.