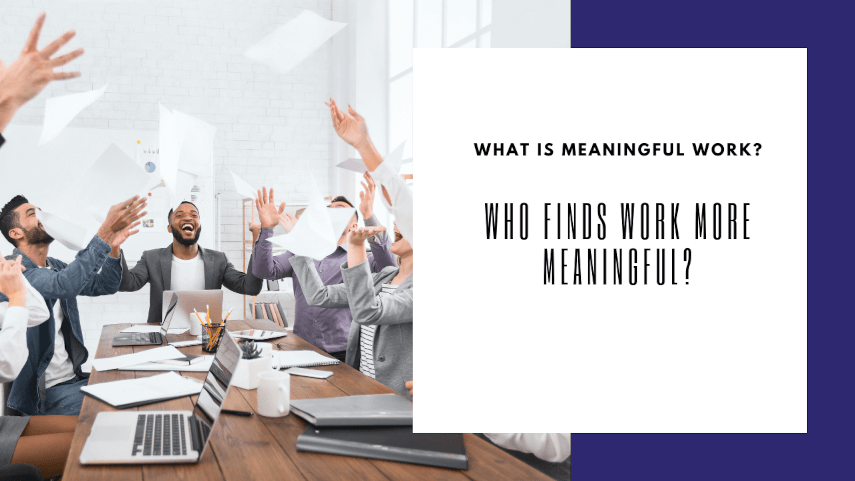 What does the research show about meaningful work, and the factors that affect it?

We looked at an extremely wide range of industry sectors, and we measured a range of psychometric and psychological characteristics.

We found a number of factors that strongly correlate with meaningful work, that can help us understand how to create meaning at work.

Let’s take a look at the results of this study.

Part 5 – How To Create Meaningful Work: What Companies Can Do

This is video number four in our five video series on meaningful work.

In this one, we’re going to show you some really interesting research data about meaningful work based on a very large sample.

And the next one after this will be about how to create a more meaningful work environment for your staff.

So that will be video five and the last one in the series.

The data that we’re showing you today is derived from a research project we undertook with Deakin University.

We measured over 2500 people in an extremely wide range of industry sectors, and we measured a range of psychometric and psychological characteristics, including the degree to which they find their work meaningful.

Meaningful work and the intention to leave

Here are the results (refer to the video).

Firstly, this is the relationship between meaningful work and intention to leave.

And we measured a range of predictors.

And this model is what’s called a multiple regression model. And to put it simply, what it means is it’s a mathematical way of evaluating whether these things predict this.

So these characteristics – meaningful work stress, conflicting expectations, et cetera (refer to the video). And this is the dependent variable, which is whether people intend to leave or stay.

Up here, what this says is that we were able to predict people’s intentions to leave or stay with 32% accuracy from the data we collected.

Now, 32% accuracy may not sound like much, but that’s not bad in the social sciences. So, for instance, your average interview predicts performance at work with around about 12% accuracy. So 32% is not inconsequential.

And what we discovered is shown in the bottom right-hand corner here (refer to the video). And this is a ranking of the most important things in predicting intention to leave.

And what do we see here? The single best predictor of whether people intended to leave their work was whether they found the work meaningful or not.

And the negative beta weight means the lower people found their work to be in terms of meaning, the more likely it is that they will leave.

There are other things that were really important, too, like conflicting expectations, role ambiguity, overall stress, and social exclusion. But what we know is that a number of these things also contribute to meaningful work.

So meaningful work is good to have, because it causes people to be more likely to stay in your organisation.

The strongest predictors of meaningful work

The next thing we looked at was the degree to which there are certain things which contribute to meaningful work.

And so what we found here (refer to the video) is that we could predict meaningful work with these predictors here with about 44% accuracy. So again, a very significant result.

What we found is that the degree to which people found their work meaningful or not, the single best predictor of that is whether they worked in a community organisation or a commercial organisation.

So we’ll give you some more data on this, but what it means is that people who work in a sector that contributes to the community – which could be hospitals, aged care, the not-for-profit sector – people who are in a community-orientated job, in general found their work much more meaningful than people who are working in commerce, which could be trading companies, transport companies, manufacturing, services companies, whatever.

So isn’t that interesting? A commercial orientation doesn’t seem to be optimum for creating a perception of meaning at work.

Other things that contribute to the capacity to see your work as meaningful – values PO alignment, so that’s person organisational alignment.

And in the last video I talked about the importance of values.

What this is measuring is whether a person perceives their values to match the organisation that they belong to (refer to the video), and if they do, then they’re much more likely to find their work to be meaningful.

Affective commitment is the degree to which a person feels an emotional attachment to work.

And finally, problem-solving. So people who are solving problems at work find their work far more meaningful.

If you’re doing work, which challenges you, in which you have the opportunity to solve problems and to work with solutions, then you’re much more likely to find your work meaningful.

Gender differences. Now, this is really interesting, and I will confess this is a very big sample.

So all you have to do to get statistical significance in a very big sample is to find relatively modest differences. But it is true to say that women find their work statistically significantly more meaningful than men do.

Now, there may be a little bit of an artefact in this. Artefacts are things where statistically things have been influenced other than by the pure effect that you’re looking for. In other words, male versus female.

So it may well be that what we’re getting is a kind of an industry sector effect. Also, this difference, whilst it’s statistically significant, it’s not very large in terms of an effect size.

The impact of age on meaning at work

Why is it so? Well, I think there are a range of possibilities.

Once I’ve shared some data like this to a group and they said, well, perhaps younger people have got better things to do than find their work meaningful. But slightly less cynical interpretation is that as people progress through their career, they learn more about what work they’re going to find meaningful.

And perhaps they gravitate to jobs which are intrinsically more suited to them. So in effect, they kind of sought their careers out to find the jobs that they’re going to find intrinsically meaningful.

And that’s why the perception of meaning increases as people age.

Organisation observations. And so this is really a different way of saying what we showed you before – community organisations versus commercial organisations.

It is fair to say, firstly, this is a very significant difference here (refer to the video), also quite a significant effect size, if you have the good fortune of working for an organisation that makes a contribution to the community, then you have a much greater sense of meaning in your work life.

So it’s a really interesting observation. And I guess there’s a lesson there for commercial organisations.

It may well be that there’s an opportunity to show how your organisation connects to the community better, through things like corporate social responsibility, volunteering, charity donations, connecting employees with community groups where perhaps they could volunteer or something of that nature.

So there’s an opportunity there, I think, for commercial organisations.

And I think also those of you who are in the not-for-profit sector where you are somehow aligned with the community sector, There’s another learning. Which is to say, you have a kind of a natural advantage over commercial organisations in the war for talent, because people know this.

And certainly in our own practise at SACS, we’ve seen many people gravitate from commercial roles into not-for-profit or community sector roles in that search for greater levels of meaning.

How about income? Do people who earn more find their work more meaningful, and the answer is slightly.

So if you earn more, there may be an opportunity to be involved in stuff which is intrinsically slightly more meaningful. But it’s not a very significant effect.

So you can’t really say that if you’re not paid much, you’re not going to find your work meaningful.

And we find this in a range of other wellbeing measures like engagement. So people who are lowly paid don’t tend to be massively less engaged in their work than people who are highly paid.

The role of education

How about education? We find no statistically significant differences here.

You have a small group of high school graduates here. And when we look at the various levels of degree qualification, what we see here (refer to the video) is that there is no difference from a statistical point of view between people who have a diploma or a certificate versus people who have a master’s degree or beyond.

So what’s going on here?

Why is it that people who come from overseas find their work in Australia more meaningful than we do? Do we take things too much for granted? Have they come from a situation where they’ve had to resiliently work their way through a range of challenges in order to get their jobs?

Because we know that going through challenges causes people to be more satisfied with what they end up with. Or is it that there’s some intrinsic difference between the nature of work in some countries and the nature of work here?

Maybe the work is somehow more nuanced or elaborated. It’s an interesting question, and I don’t really have a definitive answer to this.

But what we can say is the people who come from overseas do tend to find their work more meaningful.

And I reckon that’s one more reason for having a diverse recruitment practise.

Types of roles and meaning

How about the job that you do? Does that have an effect on the perception of meaning at work?

And the answer is yes, it does. If you happen to be in sales. Sadly, people in sales find their work less meaningful than any of the other categories that we mention here.

Clerical and admin a little higher but still relatively low. Professional jobs, there’s a much higher level of meaning perceived there. Managers, people who are in managerial roles.

But look at this (refer to the video). People who are in the community and public sector find their roles much more meaningful than anybody else.

And so there is a statistically significant difference between these results.

That doesn’t mean that you should give up if you’re in sales and think that your work is kind of doomed to be meaningless.

I think there are things that can be done to improve the levels of meaning in the work, even of people who are involved in sales, which on average seems to be quite low.

The next video in this series, video number five, will be focused on how to increase levels of perceived meaning in people’s work.

We are going to give you some really practical tips about the kinds of things that you should consider, no matter where you are in the industry sector spectrum.

The sorts of things that you could consider to cause people to perceive their work more meaningfully.

Part 5 – How To Create Meaningful Work: What Companies Can Do

Or watch the previous video about meaningful work: