How to Measure Wellbeing at Work: Engagement Matters 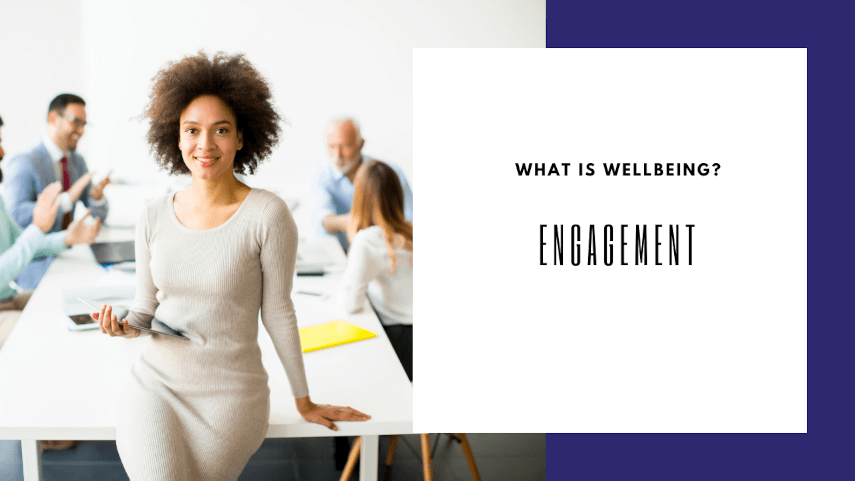 Measuring wellbeing and engagement at work

Staff wellbeing surveys can help us measure wellbeing at work, but what are we really measuring?

Workplace wellbeing is best represented by levels of engagement, which in turn can be looked at in terms of energy, flow and commitment (AKA vigour, dedication and absorption).

Let’s look at engagement and wellbeing in more detail.

Part 2 – What Happiness Is and Where Happiness Comes From

Engagement as a measure of wellbeing

Hi, Andrew from SACS, and welcome to video number three in our series on wellbeing at work.

And this time we’re talking about engagement.

And today what we’ll be talking about is a thing called engagement, which is a form of wellbeing at work.

And we’ll talk about resilience, stress, and finally, ultimately talking about how recognition can contribute to wellbeing.

So engagement is a positive psychology concept which has been researched very heavily by a range of different people, including by SACS.

And you’ll see (refer to the video) that vigour is one of the key components of engagement. So this is quite different from the historical perspective on job satisfaction.

Job satisfaction. The idea there is, do you like your job?

And job satisfaction is a nice thing to have, but in fact, people can be very happy with their job. They can be satisfied with their job, but not particularly productive.

The strength of engagement as a concept is engagement is something that has a strong energetic component to it.

So vigour, for instance, is a part of engagement.

And then dedication is all about the degree to which somebody is committed to their work. They think it’s important, they try hard and they actually try to improve in their work.

And the third component, absorption, is all about people being fully concentrated and happily engrossed in their work.

So the concept is that if you’re truly absorbed in your work, you come to work, you join your team, you start doing stuff, and you kind of get lost in your work.

Time passes, you don’t notice time passing. You don’t feel that you have to demonstrate or commit much effort to what you do. It’s kind of an immersion experience, so that’s very good for you.

At an individual level, we call this flow.

And when people are in flow states, they are happier, they are more productive, and they tend to be better psychologically, so less anxious and less depressed and so forth.

But you can also get this in a group form in engagement, and we call that absorption.

Now, vigour, dedication and absorption is certainly a proxy for wellbeing, because we know that when people have this situation, when people are vigorous, dedicated and absorbed in their work, they tend to be more productive, which is great for the company, but they also tend to leave their work less.

They tell people that it is a great place to work, they feel happy, they get sick less often.

So engagement is a really good thing to have, both for the organisation and the individual.

The business case for engagement

Now to drill into the business case for engagement in a little bit more detail.

Productivity varies with increases and decreases in engagement.

And by productivity, we mean the quantity of work, how much you actually do, but also the quality of work that you deliver. That varies.

So internal measures – job satisfaction, absenteeism, attraction, retention. They tend to vary with engagement. And so engagement is an indicator of things like staff turnover.

External measures – client satisfaction, stakeholder satisfaction. There have been a number of studies where people in customer service roles, their levels of engagement have been measured.

And then you go and ask the customers that they deal with whether they were happy with the interaction that they had and you get a 60% causation between the levels of engagement of the customer service representative and the levels of satisfaction of the person receiving the service.

So that’s a very important thing if you’re in a business which is all about customer service. But not only that, when people are highly engaged, they’re happy to provide good customer service.

OHS is affected by engagement. Number of researchers around the world have demonstrated that a more engaged workgroup is a safer work group and that’s a great thing for anybody who’s working in the organisation and a fantastic thing for the organisation itself.

You don’t have all the moral damage that you get by hurting the employees that you have, but as well as that, of course, you get the productivity gain of having a safe and smooth-running workplace.

So profit varies with engagement. A number of researchers have demonstrated that as you have high levels of engagement, you get stronger sales growth and therefore profit growth.

So it’s one of the best predictors of organisational outcomes that we’ve found.

How to measure engagement

Now you can measure engagement and here’s an example of how that’s done (refer to the video).

And flow, energy and commitment. The three components, there of vigour, dedication and absorption. Just another name for those things.

An example of workplace engagement levels

What we see is that this organisation, this group of 120 employees, their levels of engagement are low in comparison with population average (refer to the video). So they’ve got some work to do.

In the next couple of videos, we’ll be telling you more about how to recruit for engagement, how to lead for engagement and giving you some stats on engagement.

And of course, they contribute better to the organization’s success.

Click on the link below to join us for the rest of the series.

Part 2 – What Happiness Is and Where Happiness Comes From