Mission, Vision, Values. Not Worth the effort. 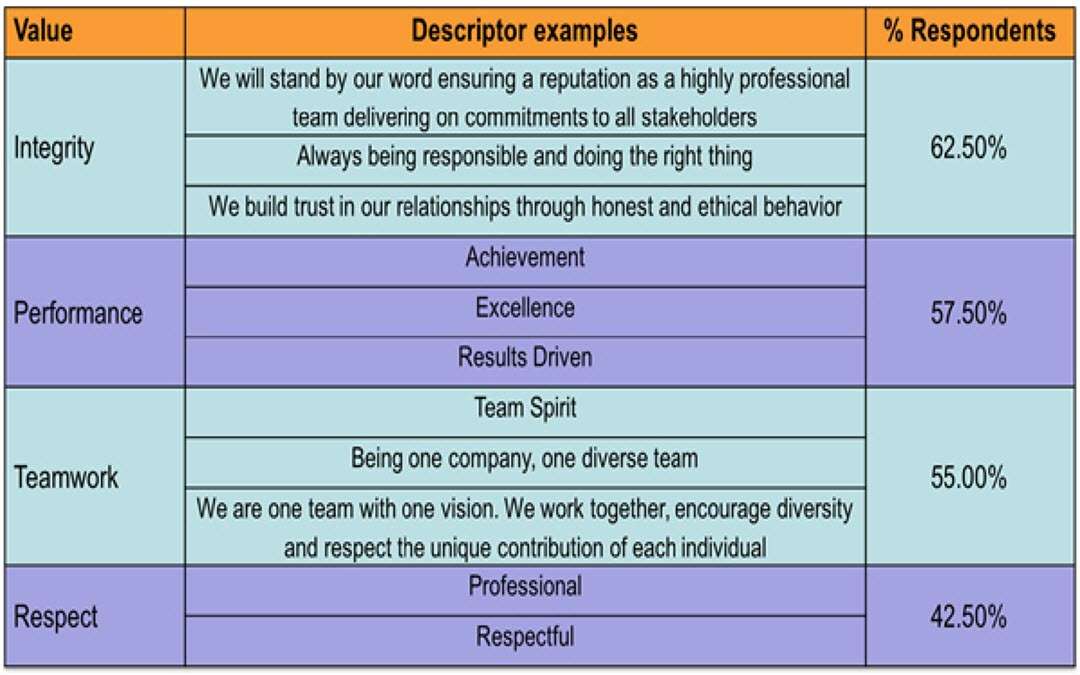 Here we go with a bit of heresy. Over the last couple of years we have turned down several invitations to pitch for Mission, Vision and Values projects. Why? I don’t like taking money under false pretences.

Some time ago I sat down on a rainy Sunday and hunted through the websites of Australia’s top 200 companies to find out what their values were. I could easily find forty of them, so I made a note of what they were and asked one of our researchers to put together a content analysis of what I found. The table above gives the top four. I guess it is reassuring that more than 60% of these organisations stand for “Integrity”, but what does that really mean? Also, does having this statement attached to the company make any difference to anything in the real world? I believe that the answer is “no” in the vast majority of cases.

Desmidt et al in 2011 conducted a meta-analyisis of 20 years of research into mission statements in organisations. They found a very weak relationship between mission statements and profitability, certainly not strong enough to justify the time and trouble of developing them. There have been other studies which have shown very little effect on staff turnover, job satisfaction, engagement or anything else of material benefit. So, why are they so popular? Because they give people a warm feeling. It’s satisfying to get into groups and theorise about what we stand for, although people sometimes get frustrated when the exercise turns into an argument over semantics. Many organisations undertake them with the best of intentions in the belief they will improve things. They do so because that’s what everyone says – the accepted wisdom.

I think in some cases they also give executive teams or CEOs bent on control the illusion that they have control. “Hey, we made a mission, vision, values statement, so we are causing people to behave the way we want.” It is at this level that these undertakings fail most significantly, because they tend not to change people’s behaviour. My view on the topic is a simple one. If you undertake such an exercise you should end up with higher levels of good behaviours or lower levels of bad behaviours.

So why don’t they work? There are two answers to this.

The alternative to the failed MVV venture is local behaviour protocols. Get your work group together and undertake the following activity:

Local behaviour protocols do increase positive behaviours and reduce negative behaviours. If you want an overall organisation statement, just take the key themes from all the team statements and create an organisational behaviour statement. I think this final step is overrated, but I understand that people want to do it.