Communication Challenges of Remote Work and How to Address Them 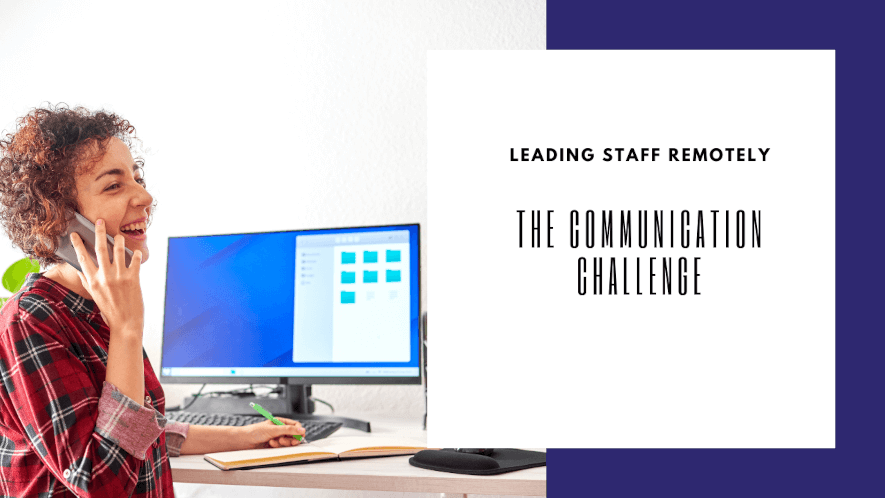 Remote working presents many challenges when it comes to communication. Learn how to communicate effectively when working remotely.

We discuss the importance of proximal vs distal forms of communication, and how to strike the right balance.

And we also talk about the importance of acculturation and the balance of negative and positive interactions.

Welcome to video number five in our eight video sequence on remote work, where we look at the psychology of remote work and seek to give you as many practical tips as possible as to how to manage people remotely effectively.

The differences between the office and remote work

I think that one of the big differences about remote work is that leaders need to plan their interactions with staff far more.

The proximal-distal challenge of communication

But there’s another dimension to this. The dimension is what we call the proximal-distal challenge in communication, in remote work. Proximal means close to me. Distal means far away from me.

There are various forms of communication which are comparatively proximal or distal (refer to the video).

Different types of communication and how proximal they are

That’s physical contact. That’s about as proximal as it gets in the workplace.

And the next most proximal is physical presence, where you don’t actually touch them. But you’re in the same room as them, and you get a chance to see their nonverbals. You get a chance to understand how they’re feeling about things by virtue of their posture and their speed of communication, all that stuff which can be much more difficult to pick up in remote leadership.

The next most distal thing is to speak to each other across a partition.

And so that’s where you are talking to somebody, but you’re not actually making eye contact with them. You know that they’re at the next cubicle, let’s say, and that’s a really common form of communication at work.

So let’s say if you’re interacting with a group of two other people on a video conference, let’s say you’re a Zoom or a teams or a Webex meeting three people is much more proximal than, let’s say, 20 and one of the things that you’ll notice.

If you do a lot of this is people kind of shrink into these tiny little icons. Well, clearly, there’s not much nonverbal communication going on there at all.

So that’s the next most proximal.

Then you have teleconversation, one on one where you’re going to have a conversation with somebody, you ring them up and you get the nonverbals of their communication, one-on-one.

Next most distal is teleconference with multiple where you might have a teleconference, where you’ve got lots of people on the call, and then there’s live chat, which is conversational.

So if you’re a Teams user, for instance, you’ll use live chat where you’re online in real-time and you’ve got very little nonverbal. Yes, there is nonverbals in the way that people express their chats. So chats can be friendlier by virtue of the words that they choose, or they can be angrier or whatever.

But there’s relatively little amount of nonverbal communication, but at least it has the big benefit of immediacy.

Then you have snail mail, and that’s about as distal as you can get.

How to use proximal communication as a remote leader

Why am I telling you all of this?

To optimise your remote leadership, you have to try to get as proximal as you can, as often as you can. So the tip here is that instead of sending somebody a text about something, why not ring them to have a conversation with them about that?

And what will happen, then is that they’ll get a much richer perspective of what it is that you think, but even more importantly, they get an interaction, a more human interaction.

I think that the challenge of remote working is very often the challenge of trying to be as proximal as you can in the situation that you’re in. Choose, for instance, as a leader to, let’s say have a video conference with somebody two or three times a week, even though maybe these issues could be dealt with an email or even a text or something like that.

Scheduling and calling somebody spontaneously into a video conference can give you really important information about how they’re coping, but also it can be a much richer experience from a psychosocial point of view.

The remote communication challenge is this proximal versus distal question, social context versus isolation.

The nature and speed of acculturation

In organisations, people gain an enormous amount from what’s called acculturation. Acculturation is where people interact with other people, and so they come to learn the behaviours that are acceptable or unacceptable.

When people are recruited and work remotely, particularly if they’ve been inducted into remote work, their first experience of the organisation has been remote working, there’s very strong evidence that acculturation is far more difficult. It happens more slowly.

So don’t be surprised if people don’t pick up on the cues as quickly if they’re working remotely as they would if they were being surrounded by their colleagues each day.

You know this is one of the most common reports of people who are not suited to remote work, but they feel a sense of distance from their colleagues. “I’m on my own”, or even “I’m ignored” that’s something we have to be careful about.

Down here, you’ll see this point about isolated or occasional contacts can become very significant (refer to the video).

Imagine if you work for a boss who speaks to you three times a week, and in one of those conversations, they say something which you think may imply that you’ve done something wrong, that you’ve let them down in some way.

The problem is, if they don’t speak to you again until next week, you might well bear that weight of that communication, that perhaps even misperception about the fact that they think that you’ve done something wrong, you may carry the weight of that for an entire week. Whereas if you’re in an office, you bump into the person and they smile at you. Okay, that dispels the concern.

So I think as leaders, we have to be very careful about the impressions that we leave from these occasional contacts because they can become very profound.

The ratio of positive vs negative interactions

The ratio of positive versus negative interactions. Look, the equation is a relatively simple one. Good corporate culture is where a person experiences many more good things than bad things.

Bad experiences, let’s say somebody says something unkind to me, bad experiences are for evolutionary reasons, much more powerful than good experiences.

And the reason is that in the time when we were hunter-gatherers or even farmers or even to this very day, perhaps, bad things can do you true damage. They can kill you. So something bad happens, we tend to pay much more attention to that than when something good happens.

And the ratio is often estimated to be somewhere around five or six to one. So if you want a sound corporate culture, you’ve got to give people five or six good experiences for every bad experience.

Now, if you think of that in a remote leadership sense, you’ve got to figure out a way of delivering those good experiences. Now, the good experiences could be learning, or they could be friendly interactions or whatever.

But I think that the balance of good versus bad becomes almost more crucial. As I mentioned earlier, when we talk about those occasional contacts, they can be very enduring.

So if you give somebody a bad experience in an interaction, then you’ve got to make sure that you give them plenty of good experiences, which adds up to the fact that you can’t leave them sitting by themselves for the next two weeks and expect them not to dwell on that question.

Then we have the question of emotional contagion. Human beings have neurology called mirror cells. Mirror cells mirror the emotions of other people.

The importance of social events

So that’s why it’s a good idea, and I don’t think I have to tell you to do this because most people are doing this, but have social events.

So maybe a Friday afternoon get together where you sit there and you go in your remote meetings, have a cup of tea or maybe a cake or maybe even a drink or something like that. But those sort of social things can be good to create that emotional contagion, positive emotional contagion to make sure that people feel like they’re part of the team.

So there’s some issues about the challenge of communication when you’re working remotely and what we’ll be talking about in the next video is skilling people up to work remotely.

How do we ensure that employees are appropriately skilled to be able to do this remote work well?

Now, we’ll also be looking at some of the research into competencies for remote workers.

Join us for the next video:

Or watch the previous video about remote working:

And if you’d like some help assessing whether your current employees or your future hires are suited to remote work, contact us for a free trial of our Remote Worker Test.