The surprising truth about the relationship between remuneration and engagement. 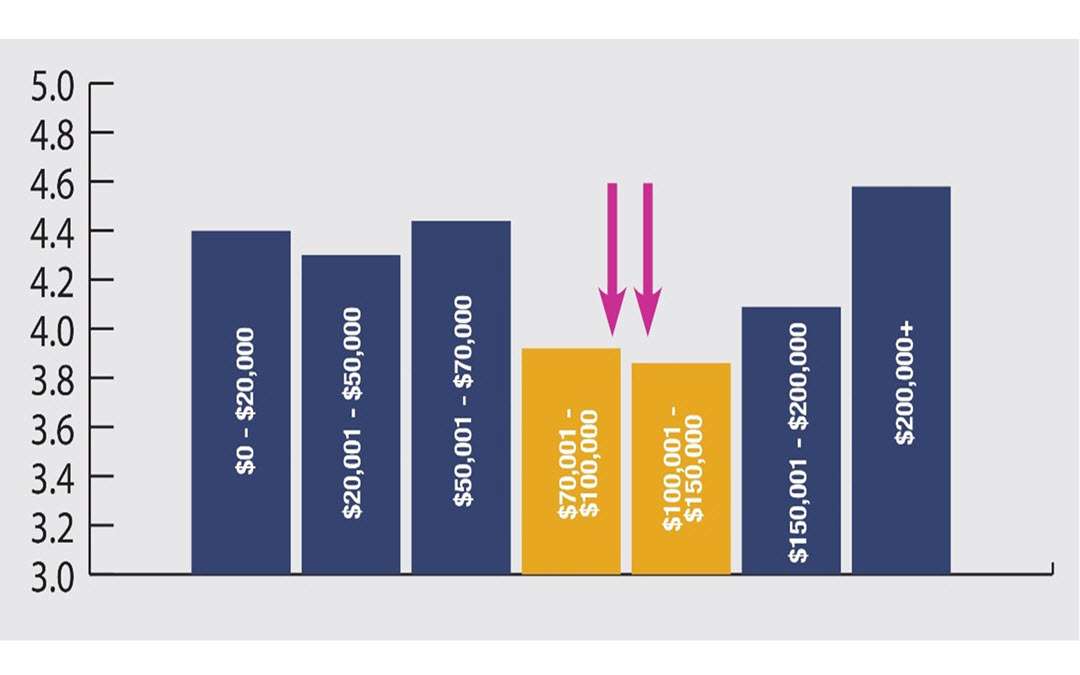 The graph above shows the engagement scores of more than 2600 employees across Australia. The scale on the left is average scores on an internationally validated measure of engagement – the Utrecht Work Engagement Scale, (Schaufeli et al, 2006). The higher the score the more passionate people are about their work. The columns represent different levels of remuneration.
Engagement is defined as the degree to which employees approach their work with Vigour, Dedication and Absorption. This can be shown to predict a range of useful outcomes such as customer satisfaction, profit and revenue growth as well as internal measures such as staff turnover and absenteeism.
Many people believe that people who are paid more are happier with their jobs, but the graph above shows that the story is not so simple.
• Comparatively lowly paid people are very engaged with their jobs
• The most highly paid people are very engaged in their work
• People in the middle, $70,000 to 150,000, are pretty miserable
Why? I think that the answer is in the graph below. This data relates to questions about the relationship of the staff member with their leader. “Encourages Autonomous Decision Making” means that the leader empowers the staff member to make their own decisions about how they do their work. As you can see:
• Relatively junior staff members think their boss encourages them to do things their own way
• Very senior people also think this
• People in the middle clearly think that they don’t have freedom to do this. Maybe they are busy handing down the decisions of the higher ups to their disgruntled staff – the meat in the sandwich effect.

There is much research evidence that empowerment increases engagement, so this is a likely explanation.
What an opportunity for increased productivity! This data suggests that a large and relatively highly paid chunk of the Australian workforce is hampered by low engagement. If their leaders were to empower them more this would be likely to significantly increase the energy they bring to their work through increased cultural vitality.
Measure the engagement of your workforce as well as its causes.
Andrew Marty
Managing Director
SACS Consulting
Schaufeli, W. B., Bakker, A. B., & Salanova, M. (2006). The measurement of work engagement with a short questionnaire: A cross-national study. Educational and psychological measurement, 66(4), 701-716