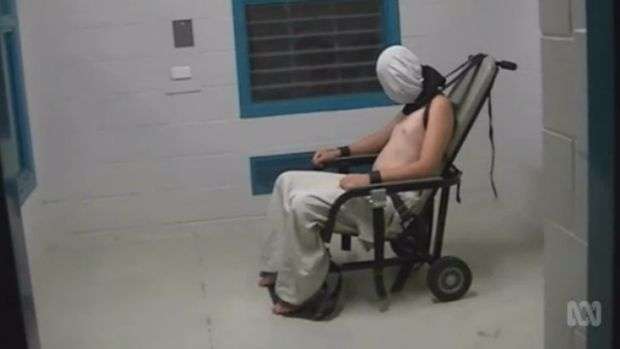 A week has passed since the airing of Four Corners expose on children’s detention in the Northern Territory.  The programme showed a range of confronting images, of which the one above was an example.

In coverage of the issue we are starting to see the sense of outrage which people understandably  felt give way to reflection.  What were potential causes and what could we do to ensure that this will not happen again?

As a psychologist one of the things I noticed was that the actions of the officers often seemed to be driven by personal anger and aggression.

We saw a child physically lifted off the floor by the neck by an officer and then thrown across a cell onto a mattress.  We heard officers saying things like, “I’ll pulverise the little ****er.” Another officer was heard to say “I don’t care how much chemical (teargas) you use,” on the children in custody.   The amazing thing is that the officers were clearly aware that these actions were being recorded, so they must have believed that they were perfectly appropriate.

In response to concerns raised the authorities have said that the officers were not properly trained, and I have no doubt that good training is extremely beneficial in ensuring appropriate behaviours, but it is nowhere near enough.

Four Corners asserted that a number of the staff involved were recruited with a background in combat sports such as cage fighting.  I’m sure that there are people with such a background who might be perfect for authorised officer roles, but there may well be a risk that people who are attracted to such sports are intrinsically aggressive.  Here are some things you should bear in mind to avoid these kinds of dangerous behaviours in role where safe behaviours are crucial: