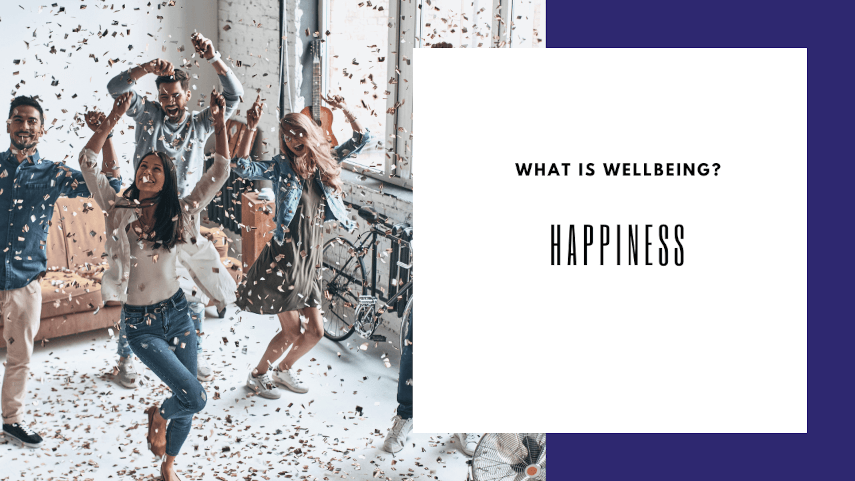 Understanding the sources and causes of happiness

What causes happiness for people? Some people would say that money makes you happy, but our data doesn’t support that.

Happiness in the brain comes from the dopamine pathways and the serotonin pathways, but that’s not the whole story.

There seem to be specific personality traits that increase your chances of being happy, along with five things, outlined in the PERMA model of happiness that determine your level of happiness.

And here’s what they are.

Part 3 – How to Measure Wellbeing at Work: Engagement Matters

Part 1 – Why Physical Health Matters for Wellbeing at Work

Welcome to video number two in the SACS series on wellbeing at work.

This video will be focused on happiness, and you can see some of the other topics that we’ll be dealing with in this series, things like engagement as a measure of wellbeing, and as a driver of wellbeing.

And finally we’ll be talking about how recognition can affect people’s levels of wellbeing.

Our brain and happiness – Dopamine

Your brain is a seat of your happiness activities. And your brain has two main happiness-related functions.

The first is the dopamine pathways, which are all about pleasure and euphoria and reward.

And in particular, one of the reasons that people tend to be hooked on games is because games are dopamine generators.

The anticipation of an achievement is something that will generate dopamine of itself.

Why? Because the anticipation of getting through a level is a dopamine generator. And when you finally get through the level, then you’ll get the dopamine reward.

And that’s one big slice of the neurological property that causes your sense of happiness.

The second component is the serotonin pathways.

And the serotonin pathways are very much about mood, about memory processing. They contribute to sleep and cognition.

But when you feel in a really good mood, when you feel calm and happy and relaxed, your serotonin pathways are certainly a contributor to that.

So you can see that the happy brain really has two components to it (refer to the video).

One is the dopamine pathways, which are all about achievement and drive and getting things done, and the anticipation of that.

And then the serotonin pathways are much more about how you feel, about the mood that you’re in.

So if you have a happy positive mood that contributes to your overall perspective of happiness.

This is Ed Diener. Ed Diener is known often as Dr. Happy, and the reason he’s known as Dr. Happy is he’s one of the most important researchers into happiness, which in psychology is often referred to as subjective wellbeing.

Diener undertook a very important study going back a couple of decades ago.

He measured the levels of cheerfulness of college freshmen, college freshmen being first-year university students, and what he did on the first day or the second day or the third day of when these people came to university, he asked them to self-rate how cheerful they were.

So you could self-rate yourself as being highly cheerful or not so cheerful.

And then he kept the data, and some years later he went back to them and he asked them a range of questions. But one of the questions he asked them was how much money they earned.

Why? Well, there’s a couple of reasons.

People who are very cheerful are attractive to other people, and so people are more likely to hire them into their next career opportunity.

But also, we know that there’s a relationship between cheerfulness and broad-mindedness, the preparedness to take on new things. So happiness can make you more successful. And it’s a good characteristic at work and in life.

Daniel Kahneman, one of the most famous psychologists ever, was able to identify the link between psychological optimism and wellbeing and success in life.

He said, in fact, that if you’re a parent, if you can wish your kids anything, wish them to be optimists.

Does many make you happy?

But then that raises the philosophical question about whether money buys you happiness.

Now, this is a very interesting study and this is again, Ed Diener with a bunch of other researchers here.

And he measured levels of psychological wellbeing, mean life evaluation, being how well do I think my life is going?

How happy am I with my life?

But the fascinating thing is that in US dollar terms, people’s levels of mean life evaluation increase up to about 80,000 US per annum, and then they start to decline.

And around about 160 thousand, everybody’s levels of mean life evaluation tend to decline.

Isn’t that interesting? Does money make you happy? Certainly that doesn’t look like it.

And in fact, you may wonder why, but a guy by the name of Marshall McLuhan many years ago coined the phrase “keeping upset with the Joneses”.

Maybe once you get to a certain level of commercial accomplishment, you start to look at things in a commercial sense and maybe you’re comparing yourself to other people.

And let’s face it, there’s only one richest person on Earth and we can’t all be that.

Happiness vs income over time

Another way of looking at this is a longitudinal question.

And in fact, what you see is a marked increase in the average person in the United States of America in terms of how rich they are.

But look at this. Their levels of subjective wellbeing, their levels of how happy they are, actually have declined over the years.

So money is not making this group happy and that’s been discovered across the world.

There is very strong evidence that money is a powerful generator of happiness if you don’t have much of it.

In other words, if you can’t feed your family, being 10% richer may make you 10% happier.

But once you get to the point where you’re beyond subsistence, increasing income doesn’t seem to increase your level of happiness.

And as Diener and his colleagues found, once you get to a certain point, more money seems to actually complicate things and you end up with a worse life evaluation.

The PERMA model of happiness

So this is the PERMA model of happiness (refer to the video).

And the PERMA model of happiness is generated by Martin Seligman, who has been a researcher into a thing called positive psychology for many years.

And Seligman has demonstrated that there are really, in all the research that’s been generated, there are some key things that are drivers of happiness and they are represented by this acronym, PERMA.

The power of focus

Positive emotions is really all about focusing on the positive things in your life.

So let me explain.

When diary studies have been done to do this, what you find is that people who focus on the bad things, their levels of wellbeing decline.

When people focus on the good things, their levels of wellbeing increase.

So what you focus on, focusing on positive emotions, focusing on solutions rather than problems, that tends to make people happier.

The second is E for engagement.

And engagement, if you’re talking about work, is really where you’re connected to your work, you think your work is important.

The R is for relationships.

And so relationships are all about the fact that human beings are social primates.

Human beings love relationships, and certainly the happiest people seem to have good quality relationships and a range of them.

M is for meaning being part of something bigger.

In other words, if you’re doing work which you think contributes to a really worthwhile goal.

And that worthwhile goal could be kind of a product-related goal, like we make something really good, or we do something that’s really worthwhile.

But it also could be more philanthropic than that.

The benefits of being happy

So the next video will be about engagement.

Engagement is kind of like happiness, but engagement is much more about a sense of energy.

It’s not just about being happy.

It’s about being focused, energetic and really concentrating hard on being successful at your work.

So engagement is something that’s good for individuals, but it’s also good for the organisations that they work for.

Join us to find out about engagement and how to achieve it.

Part 3 – How to Measure Wellbeing at Work: Engagement Matters

Part 1 – Why Physical Health Matters for Wellbeing at Work