What Is Meaningful Work and Why Does It Matter in the Workplace? 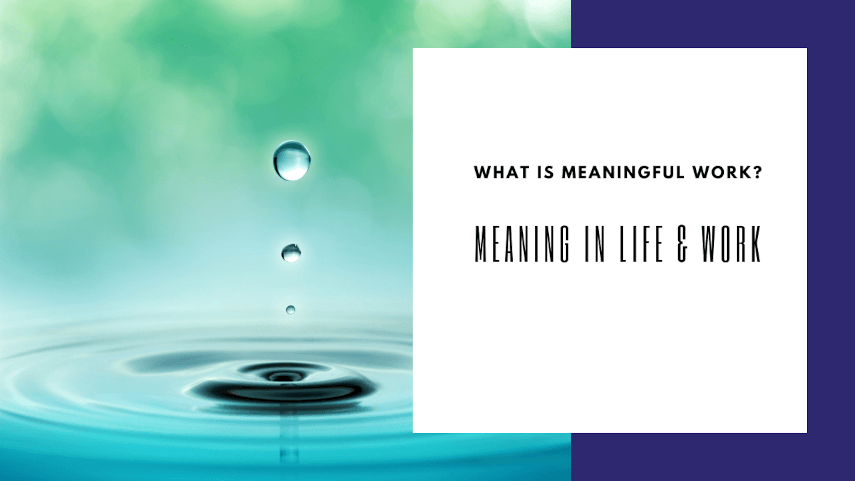 Meaning in life and at work directly influences our overall levels of wellbeing, but how important is it really?

When people find meaning in their work, this leads to positive business outcomes in performance, profits, satisfaction and more.

We cover the four key features of meaning, in work and in life, and how success – or failure – plays into a person’s satisfaction levels, plus the workplace contributors to wellbeing.

Part 2 – Why Meaningful Work Is Essential for Employee Engagement

Meaning in life and work

Welcome to our five-part series on meaningful work.

The first unit will deal with the question of meaning in life and meaning in work.

Unit two will deal with meaningful work and work engagement – the relationship between those two very important characteristics of work experience.

Then we’ll be talking about what are the characteristics of people who find work meaningful?

Interesting idea, isn’t it, that certain individuals might be more inclined to find work meaningful?

But there’s strong research evidence to indicate that.

In unit four, we’re going to show you some enlightening data about meaningful work.

And in unit five, we’re going to tell you what we know from the world of research about how to make work more meaningful.

The role of wellbeing

So the concept of meaning in life and meaning in work relates to the idea of wellbeing.

Which is to say that you’re more likely to have high levels of wellbeing if you have meaning in your life and in work.

And the ancient philosophers believed that you could have an objective view of wellbeing.

In other words, this person objectively had higher levels of wellbeing than this person.

But of course, what we know from modern psychology is that it’s all between the ears.

Wellbeing is entirely self-determined, which is why in psychology we call it subjective wellbeing.

The PERMA model of wellbeing

Here’s a diagram (refer to the video) relating to the work of a guy by the name of Martin Seligman.

He came up with a model of well being, which is called the Perma Model P-E-R-M-A.

And the first thing, he said that if you want to have high levels of wellbeing in life, what you need is to have positive emotions, optimism.

And in fact, the ratio, for instance, if you want to remain married appears to be about five to six, to one.

In other words, you need to experience five to six good things from your partner against one bad thing.

Now, if you don’t have that ratio, that’s when couples tend to separate.

The second is engagement, which is often called flow.

Then we have relationships. It’s very important.

Human beings, as is often remarked as social primates, we rely heavily on our relationships.

So if we’ve got good, sound relationships and enough of them, then we will have high levels of wellbeing.

Now, how many are necessary depends partially on personality, because if you’re an introvert, you can get by with few meaningful, deep relationships.

Whereas if you’re an extrovert, then you might care much more about being socially known and perhaps having a social reputation.

The next is about meaning.

And so that’s really what this series of presentations is all about.

It’s the question of what gives people meaning in their lives and work so that people can gain the optimum levels of wellbeing from their life and work.

And certainly Seligman’s model suggests very strongly that without meaning, you cannot have optimal levels of wellbeing.

And then the final thing that Seligman says is accomplishments, which is to say, if you are able to achieve things in what you’re doing, that makes it far more likely that you’re going to have higher levels of wellbeing than if you’re not achieving things.

So, meaning in life.

And this (refer to the video) is from the work of a gentleman by the name of Wong, Paul T. P. Wong, and what he was able to do from analysing data from an extremely wide range of studies was to identify that there are four key characteristics that seem to drive people’s meaning in life.

And those four key characteristics support an acronym PURE.

The first of these is purpose.

So people have meaning in life where they pursue a purpose or goal.

People who have an existential project and feel that they’re moving towards it seem to have much higher levels of wellbeing than those who don’t.

The second is understanding, yourself and your situation.

In other words, self-knowledge is helpful for people’s levels of wellbeing.

The next component is about taking personal responsibility, which is to say, I own my life.

I believe I have the capacity to influence outcomes in my life, and not only that, I’m prepared to take responsibility for it.

So people who have higher levels of meaning in their life tend to be people who are prepared to embrace that responsibility rather than to outsource it to somebody else.

And the next is enjoyment, which is to say that people have high levels of meaning when they feel that they are able to enjoy the experiences that they have.

Now, people who are very driven and focused on particular goals in their lives may not seek to day-to-day have pleasurable experiences so much.

And we know that there are people who get very driven in what they do, and they can actually be sacrificial in that sense, they will put pleasures aside in order to pursue those goals.

But the goals themselves are pleasurable in the achievement, particularly if the person feels that those goals have meaning and purpose and that they’re worthwhile to pursue.

The interplay between fulfilment & success

Now, this (refer to the video) is another piece of Wong’s work, and he’s talking about the relationship between fulfilment versus emptiness, and failure versus success.

And what he’s really saying is that the optimum situation is where a person is fulfilling meaning in their life and as well as that they’re being successful in doing so.

You can imagine if somebody is pursuing a particular set of goals and they’re meaningful and in important goals to them, and they’re succeeding in that well, great.

That means that they’ve got, in a sense, the ideal life.

On the other hand, if somebody is pursuing a whole bunch of really important goals and they’re failing, well, that’s the sacrificial model.

By the way, this has given rise to many characters in literature and in films over the years.

We see people who have tragic lives trying to pursue something that’s really important to them and being frustrated in the attempt.

Or certainly that’s what people in this situation report about their lives.

They feel that their life has not been worthwhile sometimes.

And then, of course, you have a situation where people are successful, but they really are not getting the meaning and fulfilment that they are seeking.

We see the situation where somebody’s pursued a career in sports or the entertainment sector, arts, music, whatever.

And maybe they’ve pursued this very passionately and sacrificed a whole range of things to get there.

But once they get there, maybe it’s not successful in terms of their wellbeing.

Maybe it’s the dream doesn’t turn out to add up to or match the expectation that people had in pursuit of that dream.

It’s sometimes said, for instance, in the music business, that success has killed far more performers than failure has.

And maybe that’s the issue. They’ve pursued this goal. They’ve got there and okay, it’s not quite as good as we would have hoped.

What is meaningful work?

So we’re going to turn on our attention to meaningful work.

And meaningful work, according to Simon Albrecht, and I’ll say more about Simon in just a moment, but he describes it as a positive psychological state.

People feel that they make a positive, important, mutual contribution to a worthwhile purpose through their work.

So their work contributes to the world in a broader sense.

Fletcher and Schofield – meaningfulness is a fundamental psychological need – and this is becoming a really hot research topic.

Later in this series of presentations, I’m going to talk about the relationship between meaningful work and things like job satisfaction and engagement.

It turns out that this concept of meaning is absolutely crucial for people’s intentions related to their work, but it’s also crucial for things like productivity.

So this is a hot area of research. People have got a lot of interest in this question of meaningful work at the moment and for good reason.

Does meaning at work matter?

So does meaning at work matter?

Well, if nothing else, we spend at least half our waking lives at work, and so that’s important of itself.

And we know that work can be a source of negative things.

Things like stress, dissatisfaction, burnout, but it can also be a source of great meaning and purpose in people’s lives.

After all, many people love their work and they characterise themselves.

What do you do? I’m a carpenter.

That’s where somebody is characterising themselves by their work. So it can be very important.

And we know that when people do find meaning in their work, there’s a whole bunch of really important outcomes, and we’ve cited some research here.

A whole bunch of things related to performance like quality and quantity of work increases when people find their work meaningful.

It also helps organisations to achieve.

So when people have meaning at work, what it does is that it causes the organisation, in total, to be more successful, both in terms of profit, in things like quality and quantity of work, stakeholder satisfaction.

Those kinds of outcomes are assisted by meaningful work. And it also tends to decrease absenteeism and stress.

And later in this series, I’m going to show you some data about the effects of meaning at work and the kinds of things that it does affect.

What meaningful work is NOT

Now just an important point. Meaningful work is not things like job satisfaction.

So job satisfaction is something that’s been measured multiple times in the history of organisational psychology.

And we know that job satisfaction is important to people, but it’s in fact not a great predictor of things like productivity, profitability.

And it’s actually not even a really good predictor of things like work turnover intention.

It doesn’t seem to predict as well, as, say, engagement does. Meaningful work also is a better predictor than job satisfaction.

Now we know that meaningful work contributes to work engagement, and it’s a good predictor of engagement. But it’s not engagement.

It’s as though meaningful work, when you’re able to achieve the confluence of things that causes people’s work to be meaningful, that will help them to be engaged.

But it will also lead to a bunch of psychological benefits which are beyond engagement.

Like, for instance, people’s affective commitment to the workplace.

Affective commitment just means how they feel about it.

I am in love with this place. I care deeply about what we do. I feel part of a community of colleagues.

So that’s Module One in our series about meaningful work.

Join us for Module Two, which will be about the relationship between meaningful work and work engagement.

Part 2 – Why Meaningful Work Is Essential for Employee Engagement