Why People Leave Their Jobs: Push and Pull Factors 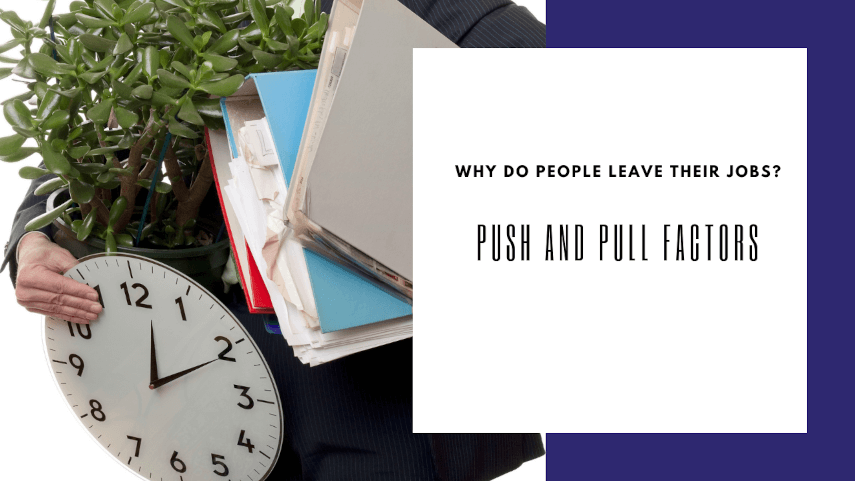 Reasons why people quit their jobs

Push factors are the things that make people want to leave a role, such as stress, lack of feedback or opportunities, or poor leadership.

Pull factors are things that attract people away from your organisation, such as new opportunities, more pay or better work-life balance.

Understanding the push and pull factors at play in your organisation can help you design recruitment and HR practises that reduce staff turnover and the associated costs to your business.

The reasons why people leave their jobs

And welcome to video number four, in the six video sequence about why people leave their jobs.

And in this video, we’ll be talking about why people leave, push factors and pull factors.

And the subsequent videos, we’ll be talking about some research findings on staff turnover and then ultimately a kind of a summary about what you can do to increase retention and reduce staff turnover.

So a push factor is something that pushes someone away from the organisation.

A pull factor is something that pulls people away from the organisation, something that’s so tempting that they can’t turn the opportunity down.

Push factors. Here are some examples.

The job or the workplace was not as expected.

And a couple of videos ago we dealt with the question of ensuring that people know what they’re letting themselves in for.

Too little coaching or feedback, too few advancement opportunities, feeling devalued and unrecognised, stress, from overwork and work-life imbalance, loss of trust or confidence in senior leaders, being encouraged to leave but not fired.

And that happens, doesn’t it, where people don’t have the courage to say, okay, well, you’re fired, but they make it uncomfortable for people in the hope that they will then start seeking a job and move on.

Lack of training and development opportunities, need for meaningful work, all could be push factors where you’re doing work which is not favourable.

The role of leadership

So you’ll notice that a number of these things relate to leadership.

And it is true to say that leadership is absolutely crucial to ensure that people are effective in their work and want to stay.

And people often say that you join a job but leave a leader. And that is true to a certain extent.

But in the research that we’ve done in this area, we found other things that can be more important.

Watch the next video, by the way, to see exactly what those are. But it is still really crucial.

The leader that you report to certainly has an enormous impact on the environment that you’re going to have at your work.

But there are some push factors.

And then there are pull factors.

So examples of pull factors, well, I get paid more.

And by the way, many organisations have concluded that they pay too little because so many people say that they left to get a better paying job.

Often people say they left to get a better paying job, purely and simply because it’s kind of not insulting to the previous organisation.

If you hated your boss, it’s much easier to say, well, I got a better paying job, which is kind of hard to refute.

It’s like an objective third-party reason. It’s so much easier to say that than I hated my boss and so much less controversial.

Another one. I got advancement or career progression, I got work-life balance, I’m retiring is clearly a pull factor.

I got unexpected opportunities or head-hunted. I had to relocate to another place, and maybe the family situation had something to do with that.

Further study to upskill or change your careers, and environmental factors.

Also, we occasionally hear that people move jobs because the office was nice or something like that. They would be environmental factors.

How to get accurate answers

How do you really get to the truth about why people left their job?

Now how many people tell the God’s honest truth under those circumstances? The answer is not many.

And there are a bunch of reasons for this. One, they don’t want to burn bridges.

By the way, it could also be that they’re really angry and so they say a lot of negative things, which would be far better if they’d had the chance to calm down.

In other words, you get more truthful answers if they had a chance to let off steam and then tell you the truth later on.

Now we know that exit surveys or exit interviews are not very accurate because we often undertake for clients a process called a post-exit interview.

And a post-exit interview is where a third party like SACS goes to the people who’ve left the organisation and you ask them, why did you leave your organisation?

Speaking to a third party after say two or three months have passed, well, you’ve got some distance between you and the job and you tend to tell the truth.

I mean it’s not like it’s always I just hated this place and these people were evil to me and those kinds of things. It’s just more truthful.

So it’s really worthwhile considering undertaking post-exit interviews because you will find out more accurately why people are leaving your jobs.

Now, if that’s the case, of course you’ve got an opportunity to remediate accurately.

But I’ve seen many organisations get as I said earlier, let’s say we don’t pay enough and so they start increasing their salary and guess what doesn’t make any difference to these level of staff turnover.

Injustice, when it comes to dollars, will drive staff turnover. But there are other matters that matter much more.

So that explains the post-exit interview survey process and push and pull factors.

The next video is all about research findings about staff turnover.

So we’ll tell you some of the things that have been calculated by way of the cost of staff turnover.

But as well as that, we’ll be giving you some results from a big study that SACS undertook about four or five years ago where we measured the reasons people left their last job. Sample size of over 2000.

Click on the links below this video to join us for the rest of the sequence.