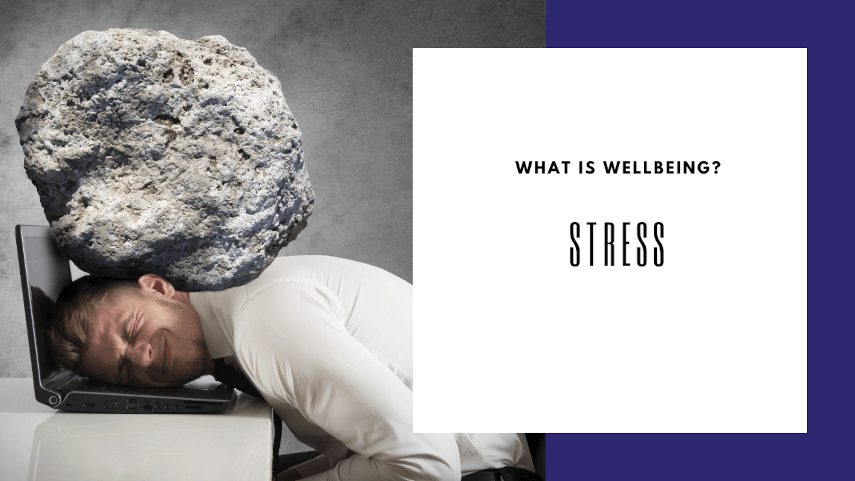 The Symptoms of Workplace Stress and Solutions

Workplace stress is generally seen as a bad thing, but in fact it can be positive as well as negative.

But negative factors, like role ambiguity, role conflict and social exclusion, can lead to stress and burnout, affecting wellbeing.

So how can organisations manage stress for their employees to ensure they’re engaged and productive but not unhappy or overwhelmed?

And why is the relationship between control and stress so important to wellbeing? Let’s find out.

Part 9 – Recognition at Work for Wellbeing: Programs, Ideas and Rewards

Managing stress in the workplace

And welcome to video number eight in our nine video series on wellbeing at work.

So far in this series, we’ve spoken about a number of the positives associated with wellbeing.

And then we entered into four videos which were specifically targeted at a thing called engagement, which is a wonderful proxy for wellbeing at work.

Engagement is where people have positive, energetic emotions at work, and it certainly relates to both productivity and to wellbeing of the individual.

Then we talked about the individual variability of wellbeing in different sectors and those kinds of things.

And then we spoke about resilience, which is about enduring wellbeing, in the sense that when people have high levels of resilience, they don’t really rely on other people for their wellbeing.

They’re able to maintain their own wellbeing, which is a very positive state.

So this video is specifically about stress and wellbeing.

And I think when people hear the word stress, they think of something which is unrelievably negative. It’s a bad thing to be stressed.

Well, in fact, it’s not quite as simple as that. The essence of it is that it’s a little bit more subtle.

And in fact, there are two types of stressors at work.

The positive type are challenge demands. So challenge demands are things like workload. And it may be interest you to know that as our workload increases, in most cases, our levels of wellbeing increase.

If you’ve ever been in a job where you haven’t got enough to do, that may not be quite as much of a surprise.

In addition, if we’re processing lots of information or we’re solving problems, that’s good for us. And that’s one of the reasons why people love computer games, because computer games are typically involved in some sort of problem-solving.

So the human brain loves to solve problems. That’s a good stress.

But there are also negative stressors, and one of them is role ambiguity.

So if you come to work and you’re not quite sure what you need to achieve at work, well, obviously that’s a bad thing. People love to be clear on what success looks like in their job.

And then you have role conflict.

And the two things maybe are not complementary with each other. That’s a stressor.

And then social exclusion.

Human beings are social primates, so we hate to be excluded by people around us. And so if you are experiencing social exclusion at work, that’s a significant stressor and will cause significant declines in your levels of wellbeing.

So here you have a graphic of a group of people’s results on the stressor assessment that we have at SACS (refer to the video). And you’ll see that the results show good stress results and bad stress results.

Challenges and hindrances. And the challenges – you’ll see that workload is largely favourable.

It’s 73rd percentile, which is higher than about 73% of the organisations that we’ve measured in Australia and New Zealand so far.

And then you see information processing, that’s a little lower than would be optimum – 40th percentile – it’s probably better if that were higher.

And you see that the question about problem-solving means that that’s a little low as well.

And so what it says to us is that the work that people are doing, they’re doing lots of work. But maybe it’s fair to say that it’s not hugely intellectually demanding.

So the ideal would be for these to increase, to match up to the levels of workload.

But perhaps more concerning is the negative stressors.

So role ambiguity. You see that this is at the 74th percentile, which says that people are really quite unsure about what their role needs to achieve (refer to the video).

Now, social exclusion is not really that much of a problem. It’s around about population average.

But in general, what you would say is that if you looked at this set of results, you would recommend to whoever is responsible for this organisation, if you can vary the work and cause it to be more intellectually challenging to match up with the workload that exists, that would be a good thing.

But as well as that, you really need to work on the question of role ambiguity here.

Many job descriptions have lists of tasks that people need to undertake and that doesn’t work very well. What we really need to do is to have outcomes from our job.

When people are clear about what their work needs to ultimately deliver, that’s when they have low levels of role ambiguity.

So that’s an area that this organisation needs to work on (refer to the video).

Managing the stress of social exclusion

Because what it really means is that people are experiencing the process of being othered, as sociologists like to call it, by their colleagues.

And if that’s the case, then really what you need to do is you need to explore that further with things like focus groups to understand where the issue is coming from, and then to put remediation in place.

And the remediation could be things like causing inclusion exercises, teaching the leaders about how to ensure that people are included more, undertaking a campaign across the organisation so that people understand the relationship between exclusion and wellbeing.

So there’s some of the things that can be done.

The critical relationship between stress and control

Some of the other things that relate to stress and wellbeing. One of the things that we know is that there is an extremely strong relationship between stress and control.

When people feel that they have no control over their workplace, then they feel more stress and that’s a bad thing.

So when people are low in control and high in stress, that is a risk of burnout. Now, burnout is not an imaginary thing.

Burnout is a real thing, and it’s a stress response to, in effect, a traumatic experience.

And when people experience this traumatic experience, it can have some of the effects that you tend to see in other trauma experiences – post traumatic stress sort of responses, things like nightmares, panic attacks, anxiety, those kinds of things.

That’s something that you would have to be careful of from a wellbeing point of view.

Then you have a situation where people are low in stress and high in control, and they tend to be comfortable and relaxed in what they do because the stress is low, but the level of control is high.

Now, once more, low stress is not an intrinsically good thing.

If stress is too low, it means that people will be kind of bored and have a sense of lassitude about their work.

And the peak performance situation is where you were high in stress and high in control.

And I think it’s worthwhile to reflect on the most satisfying time in your entire career to date.

It may well have been a time when you were pursuing a really important goal.

So the stress was high and maybe you had a high workload as well, but maybe you were also very empowered about how you went about this task and you had a chance to really optimise the way you are doing things and to get enthusiastic in a team of people to achieve these things.

But that’s time-limited and so what we often say is that the best way for staff to be is where they’re high in stress from time to time but high in control all the time because that will make the stress far more manageable.

In addition, of course, what we find is levels of leader support are also crucial.

Where leaders are supportive of their staff, where they’re kind, they’re helpful, they’re friendly, they put trust in their staff – those kinds of things are, of course likely to reduce or at least help to manage stress.

So the relationship between stress, control and support are absolutely crucial.

So a kind of facilitative leadership where you lead staff to come up with their own solutions and back those solutions, that’s about the best stress management technique that you can use.

Now, of course, if somebody is in a chronic stress situation or they’re in an episodic stress situation which is acute, in other words something really big is happening, then of course that’s when it’s time to send for the employee assistance programs which can help people by giving them an opportunity to work with clinical specialists who can help them in that way.

So that’s what we had to say about stress and wellbeing and the very next video is about recognition and wellbeing.

As I mentioned earlier human beings are social primates, so they like to belong, but they also like to be recognised by people around them.

Join us for the next video to find out optimal ways of doing that.

Part 9 – Recognition at Work for Wellbeing: Programs, Ideas and Rewards